Vancouver in Stereo â Channel One

Interactive Futures is a rad little festival/symposium in Vancouver. Itâs theme this year was stereo. The dominant representation in that theme was stereoscopic video (3D glasses kind of stuff), but the symposium expanded the concept through into more intellectual considerations on the idea of stereo in creative technological practice. Day one IF had heavy representation from a wide variety of approaches in stereo, but day two veered off into the intellectual with presentations by Steve Dietz, Paula Levine and Ottawa’s own Catherine Richards.

At first the tech loving side of me questioned the drift away from the purely stereoscopic presentations. Expanding the notions of stereo into our dual existence, divided between the technological mediated living and the un-plugged world seemed to be stretching the concept, but as each very intelligent presenter laid out their perspective I was engaged beyond my simple techno-fascination. In fact, I felt a little embarrassed at my simple boyish fetishization of the seductive left eye/right eye images. This was perhaps most pronounced when Catherine Richards pointed out the parallels between our reaction to stereo and the anecdote about the first witnesses to the power of cinema who leaped out of the way of the train on screen. My love of the stereo had been exposed for a kind of old world innocence. I felt naked without my 21st century cynicism.

But despite the increased critical focus the academics brought to my binocular experience, I think that the fascination with the development of stereo video is warranted. The creation of culture within a critical and academic context heavily encourages the development of cerebral conceptual work, and there is much in the newly accessible stereo work that focuses on simple wonder. Wonder in art often reduces me to simplistic “Cool!” or “Awesome!” reviews of the experience, and while I try to be cautious of my own spectacle fetishism I worry about the schism in contemporary culture between spectacular and meaningful work. Few seem to be able to marry the two, but many of the artist at Interactive Futures, particularly Willy Lemaitre and Munro Ferguson, are able to create meaningful work that embraces the wonder of the technique. 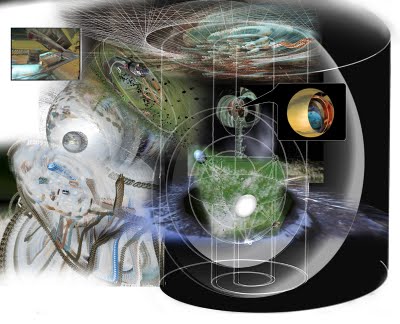 Will follow up with more from Infteractive Futures, when I have caught up with all the work waiting for me at my desk back here at the engine.

This entry was posted on Wednesday, November 25th, 2009 at 3:39 pm and is filed under Ryan Stec, Artistic Director. You can follow any responses to this entry through the RSS 2.0 feed. You can leave a response, or trackback from your own site.