Nite Ride . . . from the keyboard of Jonathan Shaughnessy 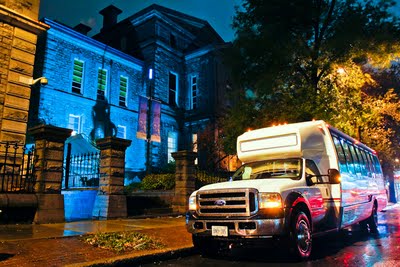 Tim Hecker and Marla Hlady took divergent yet highly effective approaches to what they had to work with in Nite Ride: a plush bus outfitted with a 5.1 surround sound stereo system. Hecker used it, the sound system that is, Hlady did not. While apparently not predicted (Hlady changed her piece and abandoned the system late in the game) the artistic results could not have been better planned in terms of giving riders, taking in both projects in the same evening, two wholly engaging yet very different sight and sound experiences. Hecker plunged straight into an immersive sonic environment to take hold of sight and senses; Hlady gave riders something to hold, literally, in the form of an elegant object to subtly guide aural sensibilities to the edge of immersion and beyond, but only should we choose.

Tim Hecker’s sprawling melodies ranged from ambient to intense, stalling and grinding as the bus meandered its way toward the Gatineau Hills on the dark rainy November evening that I took the trip. The planned trajectory from city to country seemed entirely fitting to the soundtrack, and as far as I understand the latter was for the most part directly inspired by the landscape in which we were driving. Iâm not sure if for the artist this also meant the highway and the big box stores in suburban Hull just outside the park but no matter, Hecker’s recording made an aesthetic experience of the entire voyage; the only challenge became keeping eyes open while the layering of the Montreal musicianâs carefully attuned composition drove my thoughts and perceptions deeply and rewardingly inward. It will be a treat when the MP3 version hits Art Engine. Download it and turn your car from a fortress into a sanctuary, then take your friends for a drive but donât talk to each other, just listen and keep your eyes on the road.

Marla Hlady’s project stands to my mind as a supremely realized achievement in the accomplished oeuvre of sound sculptures and multimedia works by this Toronto artist. Hlady made eight devices to be shared by fellow passengers, each in the form of a mahogany (or at least mahogany-esque) carrying case replete with MP3 player and small speakers emitting recorded sounds â some ambient, some natural. A mercury switch in each box teased analog desires while controlling the sound circuit and allowing for individual auditory manipulation. 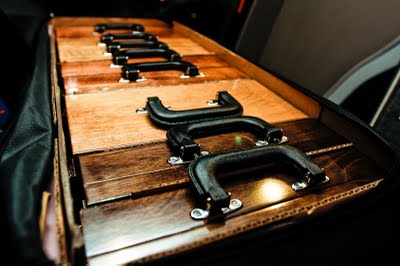 Shortly after distribution tones began to surface: a chime here, a lingering bird call there, the muted hum of the road. Under the saturation of misty windows an unraveling of effect took place somewhere between sound and silence, a rhythm that takes shape then fades, meanings transmitted, received, failed. Communication in its purest state, undifferentiated. I found myself thinking of Yo La Tengoâs lyrics from that enchanting short song on their Genius + Love compilation (1996): “It might have been Venus he was listening to that night, but I think it was probably just the static you hear when your radio is not tuned in right.” Hladyâs Nite Ride took travelers to the suitable setting of the Gatineau Hills under cloak of darkness, but my sense is that this was simply a convenient ruse to go frolic in the ether.

This entry was posted on Friday, November 13th, 2009 at 2:41 pm and is filed under Nite Ride. You can follow any responses to this entry through the RSS 2.0 feed. You can leave a response, or trackback from your own site.

One Response to “Nite Ride . . . from the keyboard of Jonathan Shaughnessy”