Sublte Technologies : Where art and science meet, hang out and catch up on things.

I was fortunate enough to visit Toronto for a festival that could be seen as the yin to the yang of Mutek and Elektra. Subtle Technologies focuses on the unique space where science and art meet. This year’s theme was networks, and the presentations ranged from theoretical mathematicians presenting on collaborative problem solving, to TV writers exploring the story potential of social network sites, to second life based performance artists.

First off, big shout outs to Jim Ruxton for his continued efforts with this festival. It is unique and important in Canada, at a time when cross-disciplinary collaborations are constantly growing in numbers and fashion, Jim has been bringing together a very eclectic and diverse group of advanced practitioners for 12 years. That’s some serious future forward thinking.

Second Life was on the brain and in full force at Subtle Tech this year. The whole festival actually had one foot in Second Life, with all the presentations simulcast into that universe, and many of the participants having [had] their laptops open to operate their avatars in the Second Life Subtle Tech space. I found many of the presentations complex enough in one world, never mind filtering it through another, but maybe they [the audience members] got to see everything twice and then it made more sense. I mean shit probably got really hectic when Scott Kidall and Victoria Scott started presenting their “No Matter” project about smuggling objects out of Second Life. We got dangerously close to creating some sort of postmodern reality vortex where we might have disappeared into a black hole of real-time 3D graphics and cardboard representations. 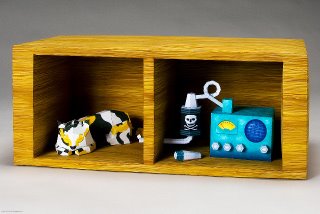 Artistically, there was a number of really interesting projects including Scott and Victoria with their dangerous self-referential work. Chris Chafe is working on real-time musical performance across fiber optic networks which gives rise to different considerations of the virtual. Instead of considering visual reference as the starting point for a virtual space, this kind of work really positions sound at the center as it create a kind of virtual room where musicians perform together. Alan Sondheim also deserves mention here for his oddly charismatic obsession with fucking up the “physical” laws of Second Life.

Finally, a special place is reserved for one of my favorite Canadian media artists, Jeremy Bailey and his WarMail performance. I love the way Jeremy’s performance persona walks a line between condescension and affection for the audience and is a great mariage of skillful programming, clever aesthetics and digital criticism. What was hilarious about the performance was how passionate the audience of academics where about succeeding. Some expressed their frustration directly to Jeremy at the end of the performance. “We just needed more time!” I guess the grey area of the process was lost on some of the more structured minds in the audience, but those same people probably understood 50% more of the symposium than I did.

From the perspective of research, Michael Nielsen topped my list of exciting presentations. Nielsen has a background in theoretical physics and quantum computing, which is to say his butt is actually smarter than me. These days he is interested in the radical and transformative power of online collaborations around scientific problem solving. Nielson took us through the incredible narrative of the “Polymath Project” which originated from Tim Gower’s blog (Gower is also super genius, just in case you where wondering…). Nielson traces the roots of this type of online collaboration to the massive coding project of Linux based operating systems and lends an incredible weight to the power of these open and transparent processes. Is it possible for these kinds of collaborations to be relevant to artistic creation? Projects like Pure Data focus on the creation and use of tools within an artistic context, but what are examples of collaborative artworks? What do they look like? and do they succeed? (Please leave me some comments if you have any ideas on this.)

This entry was posted on Saturday, June 20th, 2009 at 10:05 am and is filed under Uncategorized. You can follow any responses to this entry through the RSS 2.0 feed. You can leave a response, or trackback from your own site.