It was with a degree of apprehension that I approached the announcement of this year’s Mutek festival. Since my first visit to Montreal for the 2003 edition of the festival devoted to the “dissemination and development of digital creativity in sound, music, and audio-visual art.”, my annual treks to Montreal were shortening as fewer events piqued my interest. My enthusiasm for the festival had been sapped due to its steadily increasing popularity (and the consequent attendance logistics and venue crowding that result), the festival’s embrace of already ubiquitous forms of electronic music, and the over-familiar coterie of Montreal-based artists from which Mutek has repeatedly drawn.

My excitement was stoked this year, however, by the line up for the festival’s 10th anniversary. With a healthy dose of more exploratory elements alongside the usual crowd-pleasers and late-night DJs, I found Mutek’s 10 anniversary year the most stimulating since 2003. Over the next few blog entries I’ll be posting summaries and reflections on what I caught of Mutek_10.

2009”s opening performance was A/VISIONS 1: Extended Focus, consisting of the North American premiere by Cologne’s GAS, and Montreal’s HERMAN KOLGEN. The A/VISIONS series took place in the beautiful and atmospheric Monument National, an old theatre similar in feel to Ottawa’s Mayfair. With seating on two levels, flash photography discouraged, and the lack of a bar, audiences were able to focus their attention on the music and performers. Throw in a top-notch sound system and sympathetic, capable sound engineers, and the entire A/VISIONS series was shaping up to be a highlight of the festival. All performances were accompanied by a visual element, provided by either the artist, or a local collaborator drawn from Montreal’s rich community of VJs. 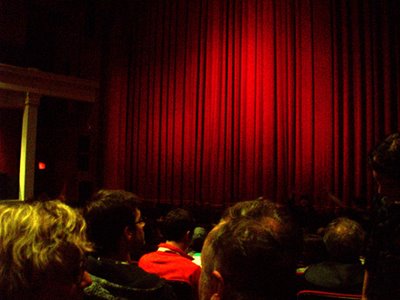 GAS is one of the many alter-egos of Cologne-based producer Wolfgang Voigt, founder of the influential Kompakt record label/store/ distribution company. As GAS, Voigt released four full-length albums and two 12″s throughout the 90s before falling silent. 2008 saw the re-release of all four long out-of-print albums in the Nah und Fern (“near and far”) boxset, as well as a limited edition book containing Voigt’s GAS-related photography which also included a CD of early tracks. With the 2009 reissue of a compilation of Voigt’s seminal STUDIO 1 alter-ego, the moment was ripe for a Voigt appearance in North America.

Inspired by familial outings into the forests of Germany, as well as adolescent escapes (both acid-fueled and sober) into the depths of the Konigsforst, the quintessential GAS sound is as gauzy and single-minded as the name suggests. Layers of slowed, looped, cut and treated samples from German classical music (such as Wagner and Schoenburg) are treated beyond recognition, abstracted from their sources and layered upon each other to form a constantly shifting tonal mass overtop a distant and muffled kick-drum. The GAS experience is enveloping and all-encompassing; similar to wandering alone through a fog-shrouded forest in search of a rave heard– by the bass kick alone– far off in the distance. At times sun-dappled, light and glistening, and at others ominous, hesitant and full of dread, GAS manages to manifest, with an incredibly simple formula, a complex sound as psychedelic as it is modern. 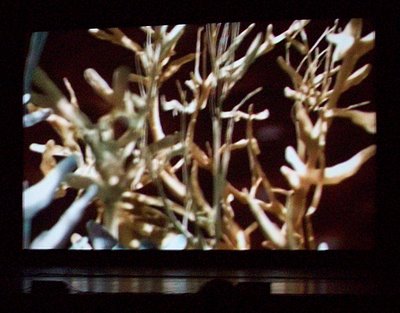 Voigt has described his aim with GAS as an attempt to bring “the [German] forest into the disco“, and this is borne out in the visuals accompanying the music. Three of the four GAS albums are adorned with photographs of thickets, branches, tree trunks and leaves, evoking a floral density that finds equal expression in the music therein. Shot by Voigt himself, and tinted with various colours to evoke mood, the visuals for the live GAS performance were akin to animated versions of the album covers, perfectly matching the moods of the pieces that Voigt faded in and out of the set. For the first piece, the camera moved slowly forward through a meditative blue forest, passing by endless layers of foliage; dappled yellows and reds glistening through the trees like sunlight. For another, the camera slowly rotated around the bright and rhizomatic growth of tree shoots and branches, which grew more complex and entwined as the track progressed. Later in the set, darker and more menacing tracks were accompanied by high contrast neons and strobe effects, or a creepy, thick blackness out of which the barest glimpse of flora flickered with the red light of an unseen fire. Near the show’s apex, a semi-transparent screen descended at the front of the stage. As imagery filtered through to the rear screen, which was in use for the whole performance, a truly hallucinatory 3D effect was created, with billowing leaves and branches seeming to float in the air of the theatre itself. 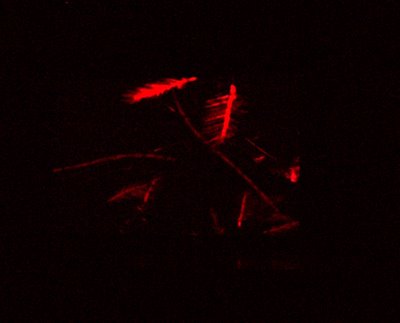 Many of GAS’ pieces are ten minutes or longer, and Voigt patiently allowed them to unravel and develop alongside the visuals. Somewhat surprisingly, he performed less of the beat-anchored GAS pieces and more of the purely ambient tracks that appeared on the self-titled and Pop albums. Ambience-aside, three epic beat-oriented pieces formed the heart of the show.

The final piece of the hour-plus set worked a dark, paranoid drone to a frenzied intensity; the word “GAS” fading toward the screen at a moment of dissonance and volume that created an exhilarating sense of almost Lynchian terror. The standing ovation that succeeded the finale was as much a tribute to the performance as to Voigt’s artistic contributions to techno over his long career. 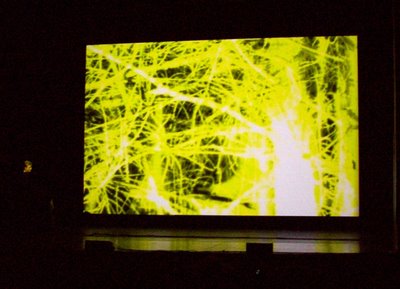 After a short intermission, HERMAN KOLGEN premiered IN/JECT, a roughly 45-minute audio/visual work that combined film-like imagery with a synaesthetic soundtrack. Roughly narrative, IN/JECT consisted of of high definition imagery depicting the fluctuating physical, neurological, and psychological states of a man submerged in a cistern whilst injected with a foreign substance. At times beautiful, shot with the highest production quality and treated at with various visual effects, IN/JECT created a weightless yet claustrophobic mood at odds with the pristine beauty of its images. 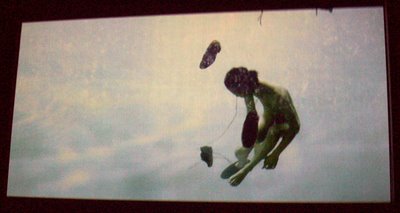 Sound-wise, Kolgen worked a vocabulary of bass swells, hums, glitches, chirps and noises that are well codified in the last 10 years of experimental and electro-acoustic music. As familiar as these sounds were, their production and rendering was top quality, and the piece demonstrated an impressive synchronicity between its sonic and visual components; rhythm, editing, narrative events and visual treatments finding shape in both media. 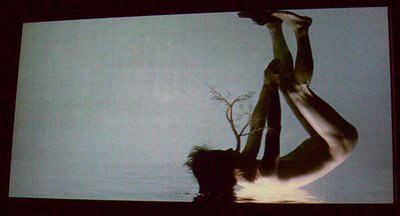 IN/JECT suffered from its duration, and could have benefitted from a tighter cut. Several sequences overstayed their welcome, ostensibly to allow Kolgen to demonstrate his arsenal of synaesthetic visual and audio treatments. In particular, an extended sequence overstated the male subject thrashing around in the remains of fish that he had (the film implied) just torn apart. The audience’s reception for Kolgen was enthusiastic however, despite a sizable portion of the crowd departing after GAS (presumably for the more club oriented Nocturne 1 that had since started elsewhere). Although aesthetically impressive, IN/JECT‘s highly formal presentation ultimately felt empty and without substance. Overall, I was left with the impression I get from a an slickly produced music video, or a well-funded television commercial: at times aesthetically awe-inspiring but impenetrable and without much to offer outside its formal conceits and visual innovations.

This entry was posted on Sunday, June 7th, 2009 at 11:36 pm and is filed under Uncategorized. You can follow any responses to this entry through the RSS 2.0 feed. You can leave a response, or trackback from your own site.