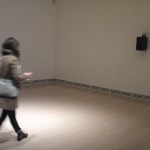 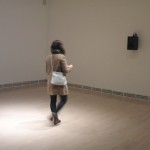 First impression of Very Nervous System by David Rokeby, currently on view at CUAG: Iâve seen this before.

It took me a few hours and eventually giving in to a quick Google search (a functioning external memory for many of us) to realize that Iâd seen Very Nervous System at an exhibition in Linz, Austria last year called See This Sound.Â  It had been shown in a more enclosed, intimate environment, a small room sealed off from the rest of the Lentos Museum by a thick black curtain.Â Its current manifestation at CUAG is more open-concept, allowing for a whole new experience of the work.

I remember my Austrian roommate and her sister crossing the room in confident strides, diagonally back and forth, waving their arms up and down, crouching down and springing up repeatedly, the various grumbles and growls of Rokebyâs VNS erupting from wall-mounted speakers.Â  When the viewer realizes that the installation is responding to his/her unique movements, there is a sudden burst of excitement that stems from being directly implicated by a work in a gallery space.Â  Quickly, though, this excitement fades with the eerie realization that you are being watched, and your movements recorded.

Of course, the theme of surveillance is present in many of David Rokeby’s works, both implicitly andÂ explicitly. Â In Sorting Daemon (2003) cameras were set up in downtown Toronto and image-recognition technology was used to capture and isolate pictures of passersby, sorting them into a kind of gradient collage based on hue, colour saturation, and size.Â  According to Rokebyâs comments about the work on his website, the “piece was triggered by my concerns about the increasing use of automated systems for profiling people as part of the ‘war on terrorism’ and is an attempt to help ask questions about appropriate uses of technology.â

Although VNS has a more light-hearted, playful feel to it, early concerns with notion of public surveillance are present in the work.Â  A small, very inconspicuous camera mounted on the ceiling identifies bodies in the gallery space and engages with their movements through the production of various sounds.Â  The work is unique in its immateriality; the only physical evidence of it is one speaker facing another on adjacent walls of the gallery and, of course, the watchful eye of the camera above.Â  With a little time and experimentation, I began to realize just how remarkably intuitive and intricate Rokebyâs creation is.Â  Like the bodyâs nervous system, with its complex network of neurons and signals transmitting messages and provoking reactions, VNS forms networks between body and machine, movement and sound, answering each tiny gesture with a corresponding snarl, crinkle, or clank.Â  One sound that stood out was like friction between heavy chains, but I also overheard another visitor giggle: âIt sounds like a lion!â

Even though the movements of the participant are improvised, the patterns of motion and sound become indexical, and as curator Jesse Stewart explains: âinstead of the body responding to music, the movements of the body actually produce the sounds and orchestrate the piece.âÂ  This makes for a fascinating connection between the body and the external components that track and amplify its movements.Â  The ephemeral quality of the piece reminds me of all of the invisible technology constantly buzzing around us (electromagnetic radiation from cell phones, wireless devices, even dimmer switches) and our constant connectedness to technological devices.Â  When I tracked down the showâs curator, Jesse Stewart, he had some even more interesting insights to offer on David Rokebyâs perplexing Very Nervous System:

This might be difficult to answer since the show only recently opened, but what have you observed in visitorsâ reactions to the work?Â  To what extent do you think shyness and âgallery etiquetteâ prevent visitors from experiencing Very Nervous System to its full potential?

Although the movements of visitors to the gallery are improvised and intuitive, the sonic responses from the system are not. They are, in fact, highly structured, the result of careful computer programming that David has been working on for over a quarter century. So there is an interesting tension between the highly structured computer logic of binary code that underpins the piece and the intuitive gestures that people use to activate it. When people interact with the work, there is often a moment of dawning when they realize that their movements are controlling the sounds they hear and they realize that they can repeat particular sounds by repeating certain gestures. This creates the âbiofeedback loopâ between body and machine and encourages a sense of creative play, wonder, and discovery.

Even though David Rokeby has been developing Very Nervous System since the 80s, it seems like there has been a growing trend surrounding art that deals with cybernetics, intuitive technologies, and the notion of the human-machine hybrid.Â  Did you feel like this was an opportune time to bring a work like VNS to Ottawa, and if so, why?

Advances in computer and video technologies, as well as the increasing availability and affordability of those technologies, have played an important role in the growth of interactive media based work. The past decade or so has also witnessed the emergence and rapid expansion of the field of so-called âsound artâ of which Very Nervous System might be seen as a particularly trenchant example. The ongoing activities of artists working with interactive media technologies and sound have helped create an institutional context for this kind of work which, in turn, has enabled it to flourish. Given my own interdisciplinary background in the sonic and visual arts, I have been looking for ways to build bridges between the music and art scenes in Ottawa since I moved here two years ago. Curating an exhibition of David Rokebyâs work, which I have been following closely since we first met in the mid-1990s, seemed like an exciting opportunity to do that. In more general terms, we live in an increasingly mediatized, computer-centric society. Most people today, especially those under the age of 25, are always online, always connected. One of the things I love about VNS is that it uses information technologies to create a very different kind of experience between humans and machines, one that is ritualistic and meditative in nature, not utilitarian. This is another reason that it seemed like an opportune time to bring VNS to Ottawa.

From a musicianâs perspective, can you comment on the very intriguing concept of the human body as an instrument (or VNS as an instrument that is played with the body)?Â  Iâm also curious about whether you came across anything in your research that indicates why Rokeby made the shift from conventionally musical sounds to sounds of a more abstract nature.

Almost all instruments are performed with some sort of physical action (the only exception I can think of is a piece by Alvin Lucier in which the performerâs alpha brain waves are highly amplified, causing a series of large gongs to vibrateâthe performer just sits motionless on stage with his or her head hooked up to electrodes). Pretty well every other mode of music making I can think of involves physical gestures, even the creation of music with computers. What is different in the Rokeby piece is 1) the nature of the interface between body and instrument; 2) the fact that it is left to the discretion of the performer and 3) the fact that the instrument is invisible. This creates the potential for people to develop a new awareness of their own bodies. I think this is part of the reason that David made the shift from more conventional musical sounds to more tactile sounds (they arenât more abstract; if anything, they are more concrete). By interacting with the work, one really gets a sense of the tactility of the sound which creates a much more intimate experience.

Very Nervous System is on at the Carleton University Art Gallery (CUAG) until January 30th, 2011.

I also highly recommend checking out some of the other events that have been planned alongside the exhibition including:

Thanks again to curator, Jesse Stewart, for bringing such an influential work to Ottawa and for answering my questions!

This entry was posted on Wednesday, December 8th, 2010 at 4:26 pm and is filed under Nancy Webb. You can follow any responses to this entry through the RSS 2.0 feed. You can leave a response, or trackback from your own site.