At our meeting last Wednesday Richard Briggs, one of Ottawa’s makers from the first Maker Faire and member of the Human Powered Vehicle Operators of Ottawa or HPVOoO, brought in some of the electroluminescent wire he had been working with to create an EL-wired human powered train for the Help Santa Toy Parade put on by the Ottawa Professional Firefighters Association that traversed through downtown Ottawa on November 20th collecting toys and donations for kids.

Originally conceived from doodles on a placemat at a weekly hangout, the train progressed quickly over a few weekends of coordinated meetups and concentrated work. 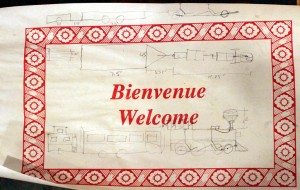 Here’s a shot of the train after the build party at re-Cycles, a non-profit community bike recycling shop in Ottawa: 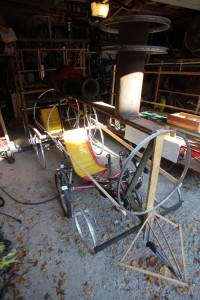 By working with several vehicle groups they were able to procure a real diesel air horn for the train and the end result was awesome! 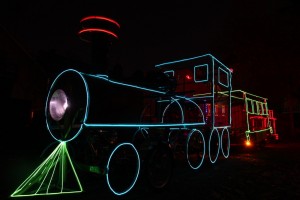 On the heels of the success from Ottawa’s (and Canada’s) first Maker Faire the Mod Lab had an in-depth discussion on the expansion of the maker community in Ottawa and the people, resources, projects, workshops and space that are all forming around the nexus of Artengine. It’s an exciting time to be a part of the DIY community here and it’s great to see so much support for it! Mod Lab now has a wiki where people can contribute ideas and share information. If you’d like to be a part of the makings of an awesome community resource and space please share your thoughts!

This entry was posted on Wednesday, November 24th, 2010 at 2:32 pm and is filed under Emily Daniels. You can follow any responses to this entry through the RSS 2.0 feed. You can leave a response, or trackback from your own site.