A lost era of video art?

Corina McDonald is new member of our excellent blog team and will be posting regulairly for us. She is a writer, researcher and DJ and is a recent addition to the Vague Terrain editorial team. Enjoy! – AD 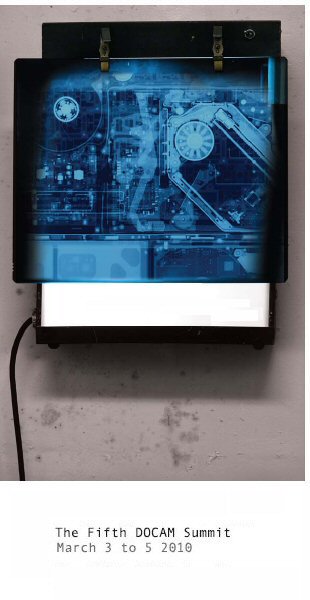 The fifth DOCAM Summit took place in Montreal this week, the final meeting of this five year SSHRC-funded research project into the documentation and conservation of new media artworks. Some of the challenges shadowing the preservation of media arts heritage include technological obsolescence, the notion of authenticity when applied to digital or variable components, the importance of documenting user experience, and the ways in which the technologies used in a work contribute to its identity. The project took a multidisciplinary approach to these issues, leveraging the expertise of museum professionals and university researchers from a variety of disciplines to produce practical tools that can be used by artists, curators and conservators to document and preserve our experience of media artworks.

The first session of the Summit focused on the history of technology and its importance in understanding the preservation challenges inherent to new media. Presentations were made by Alain Depocas, the Director of Research at DOCAM, Mona Jimenez, Associate Arts Professor/Associate Director in New York Universityâs graduate program in Moving Image Archiving and Preservation, Sylvie Lacerte, author, researcher, independent curator and former DOCAM coordinator and Jean Gagnon, independent curator and former Executive Director of the Daniel Langlois Foundation, the host institution of the DOCAM Research Alliance. In the discussion that ensued, themes such as pedagogy, interdisciplinarity and the historicity of video art were raised, reflecting many of the main research themes tackled by DOCAM.

Mona Jimenezâs presentation ‘Custom Machines and Conservation Studies’ provided an excellent example of the relationship between technological processes and the effects and behaviours that they produce to create a work of art. She believes that students today who are familiar with digital video do not necessarily have a good understanding of the way in which analog video is constructed in time. In her teaching she includes course material on custom machines created by artists of the 60’s and 70’s as a way of enhancing her students appreciation of video as a signal constructed and shaped in time by physical processes and devices. To illustrate this point she showed segments of a video made at the Experimental TV Center that demonstrate the processes at work in Nam June Paik’s raster manipulation unit, or âwobbulatorâ of 1976. This visual recording of a video artwork in operation gives us a more holistic appreciation for the work than what we might get by viewing a tape of the output alone. She argued that conservation studies often focus too much on preserving tape as a product rather than the physical mechanisms, processes and knowledge that created the work in time.

Jean Gagnon also argued that recognition of the techno-aesthetic aspects of video art is necessary in preservation to ensure that the end product is not isolated from the processes which created it. Lamentably he pointed out that amazing collections of video art languish in the vaults of institutions such as the National Gallery of Canada, and fears that we may face a lost era of video art from the 1980’s, especially if the historicity of the technological components of these works is not acknowledged as an important element of their preservation.

Alain Depocas presented the Technological Timeline, an output of the DOCAM project which juxtaposes technological components, technologies and artworks in an online visual interface in order to reveal the evolution of these technologies in the context of their usage in media artworks. It provides a visual interface that ties together the histories of specific works used as case studies during the project and their technological components. It is expected that this type of information will be useful as a pedagogical aid that underlines the techno-aesthetic nature of media art. 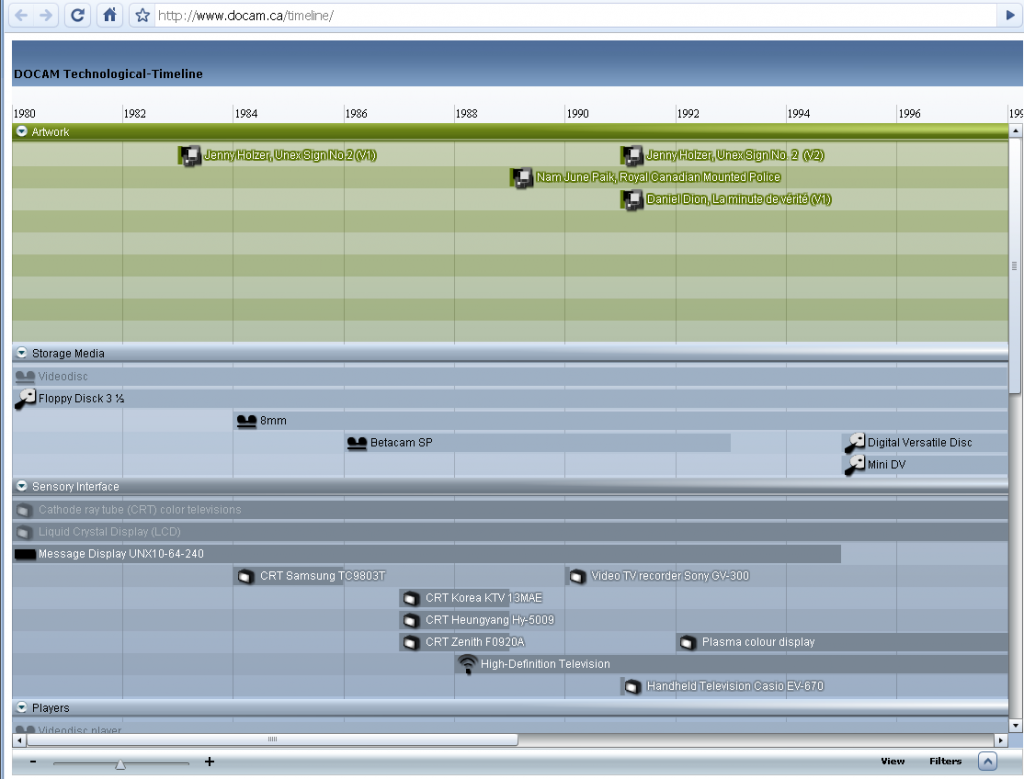 Sylvie Lacerte presented her work as head of the DOCAM seminar, a graduate seminar which was held for four years, alternating between McGill University and UQAM. The seminar attracted students from a wide variety of disciplines, including art history, information science and museology. The participants of the session all agreed that this kind of interdisciplinarity across professional communities will be crucial to the future of threatened works of video art. In a later session, Jon Ippolito argued for the role of crowdsourcing in preserving media art and asserted the importance of engaging not only professional communities but also user/fan communities in documentary practices and preservation strategies. He used the example of informal online communities dedicated to the emulation of video games from the 80’s to demonstrate how knowledge existing outside institutional walls may be a valuable asset to long term preservation.

The video recording of this session and of the entire DOCAM Summit will be made available online shortly at www.docam.ca. In the meantime, the tools and resources produced by the research alliance over the past 5 years are freely available on their website â browse and enjoy!

This entry was posted on Saturday, March 13th, 2010 at 7:07 pm and is filed under Corina McDonald. You can follow any responses to this entry through the RSS 2.0 feed. You can leave a response, or trackback from your own site.