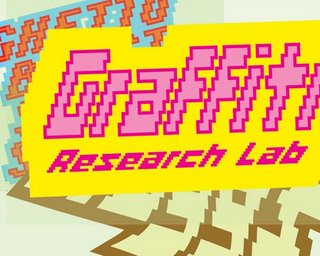 Friday, July 24th Artengine teams up with Club SAW and House of Paint to present Graffiti Research Lab, Ghetto Blast Sound System and from L.A.’s DJ Huggs. This an official Late Night Event for Hip Hop 360 and a big launch party for House of Paint. Sprinkle in some Straight Goods and Disorganised and everything just gets fantastic!

Graffiti Research Lab and Ghetto Blast Sound System will be working in residence in the M70 Lab to amalgamate the best parts of their technological super powers and create a battery power audio-visual sound system capable of interactive light projections anywhere our projectors can throw.

GRL Canada’s Jesse Scott will be here between his recent stint at the Banff New Media Center and his upcoming presentation at the all-encompassing art party Nuit Blanche in Toronto this fall. GRL has been honing interactive projection technology first released by Evan Roth and James Powderly after their fellowship at Eyebeam in NYC. The original LaserTag project uses lasers, a camera, projector and software to allow anyone to write sky high on buildings. GRL Canada have redirected the interactivity back onto a more wall like surface for the graffiti writers, creating an interactive projection wall that is duplicated on massive scale on a surrounding building. Check our test below for a sample of where the writers work will appear. 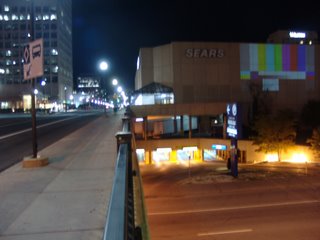 The Ghetto Blast Sound System is the magic robot himself Michael Caffrey and VJ Daisey – Kerry Campbell. This off-the-grid sound system is a Frankenstein beast of the best kind optimizing the power from deep cycle batteries and car stereo parts to create a stand alone system perfect for every kind of free party, projection intervention you can think of.

This collaboration between Club SAW, House of Paint and Artengine is a new direction for Club SAW as the Club matures out of its role as an accessible venue and takes on a more active programming role. We are delighted to be a part of that process and look forward to what will emerge from one of the cities most innovative spaces.

Of course this night will be full of party with Huggs keeping the main dance party locked in his sights, and don’t forget the tiny tower of power Iggggggy Smalls hosting the mosting. If you doubt me on the largess of this event check how much fun one of the last Huggs + Straight Goods/Disorg parties was.

This entry was posted on Thursday, July 9th, 2009 at 2:49 pm and is filed under Uncategorized. You can follow any responses to this entry through the RSS 2.0 feed. You can leave a response, or trackback from your own site.