Things Often Don’t Go as Planned – Fortunately We Have Help

The Luminartists, a partnership betweenÂ Anthony Scavarelli andÂ Henri Kuschkowitz, are currently in residency at the Invest Ottawa space. Over the course of there residency they will be posting chronicles of their project on the Artengine blog. Check back to see their progress! 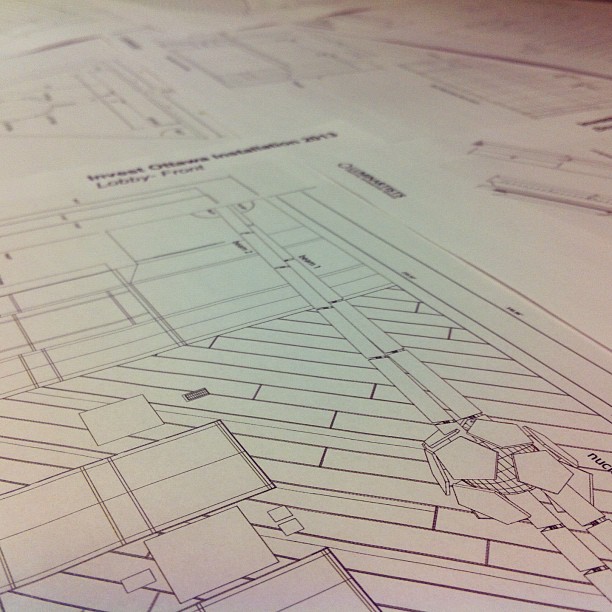 Technical Drawings in a Heap

Now over two and half months into the Invest Ottawa Residency we now have a very clear picture of the installation we want to create. We have a preliminary program up and running with some materials ordered and a rough prototype built; but there have been some close calls almost resulting in completely re-working the piece in its last hour. It feels strange to admit this, embarrassing even, but in a project like this we believe in transparency. As emerging artists still learning the ropes I also believe that this has been a great learning experience, furthering our growth as not only artists but also our belief in the openness of the local art, business, and academic communities.

âA life spent making mistakes is not only more honorable,
but more useful than a life spent doing nothing.â
– George Bernard Shaw, Irish playwright, writer, and co-founder of the London School of Economics

I originally wanted to title this blog post âI am a terrible project managerâ; but thought better of it as it is far too self-effacing and not the complete truth. Assuming the role of âcreative directorâ (likely only because I have the loudest voice – my Italian roots perhaps!) I also naturally assume the role of manager in many of our projects; but in truth this is an over-simplification as Henri and our Algonquin assistant Kevin have also contributed great ideas and motivations towards this projects concept and objectives. As often is the case though, there are times when many ideas and tasks must be amalgamated into one singular focus and this is where I often find myself stepping in. In this sense general roles start to emerge: myself as an ideator and software programmer, Henri as the hardware and technology programmer and constructionist, and Kevin – he falls in very well as a very helpful assistant of many skills. The issues that have emerged are not completely project management based though. Sometimes I feel settling on an idea so large in both scope and size may not have been the ideal way to utilize our relatively small amount of time here to create this piece; but together, Henri, Kevin, and myself were determined push ourselves to make it work. The following are some of the many factors related to the scope and complexity of this project we may have overlooked in the process of design – along with some of their solutions, in large part thanks to the communities.

Perhaps borne of our naivety as new artists or just pure excitement – I tend to think it is very much both – as we progressed through our exploratory research we decided to best utilize the space through volumetric constructions as opposed to two dimensional screens. Using the environment to symbiotically mesh with the installation was paramount, as opposed to merely using it as a canvas to hang materials. This lead us to wander into territory that were only familiar with on smaller scales – programmable LED lights and custom hardware created using Arduino. Sure we have worked with Arduino and LED lights and sensors in the past (Ottawaâs first Nuit Blanche for example) but on this scale (estimating 3840 LED lights to control and 352 feet squared of acrylic to cut, shape, and hang ) we were getting very close to our limits in knowledge, leading us to have to do a great deal of research into the setups required for such scale as well as learning beyond our current knowledge to control everything.

Exploring and expanding upon our limits as technical artists is definitely a good thing; but when we find ourselves in an âartist – clientâ relationship, such as seems to be the case with this Invest Ottawa project, we must also sell to our stakeholders at Invest Ottawa and the City of Ottawa. Inspiring confidence in the completion of the project is hugely important.

Fortunately we have a great network of other artists we can talk to for guidance and help with some of the finer details. By leveraging their great experience the project seemingly becomes much smaller. Thanks Ryan Stec, Andrew O’Malley, Peter Schmelzer, and James Acres. 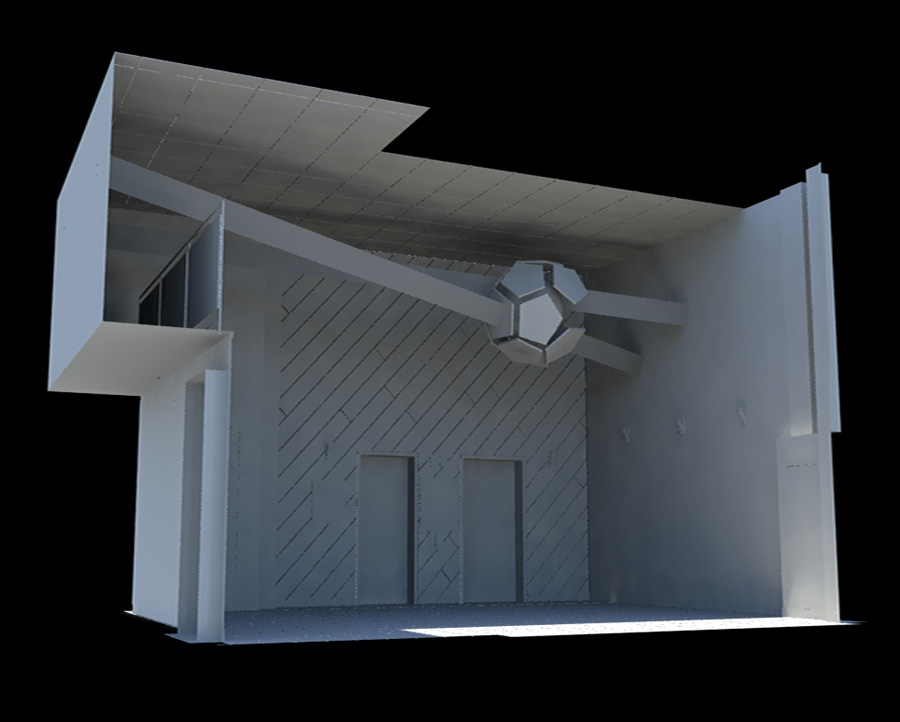 Plan ‘A’ – Creating Beams to Pass Through the Space 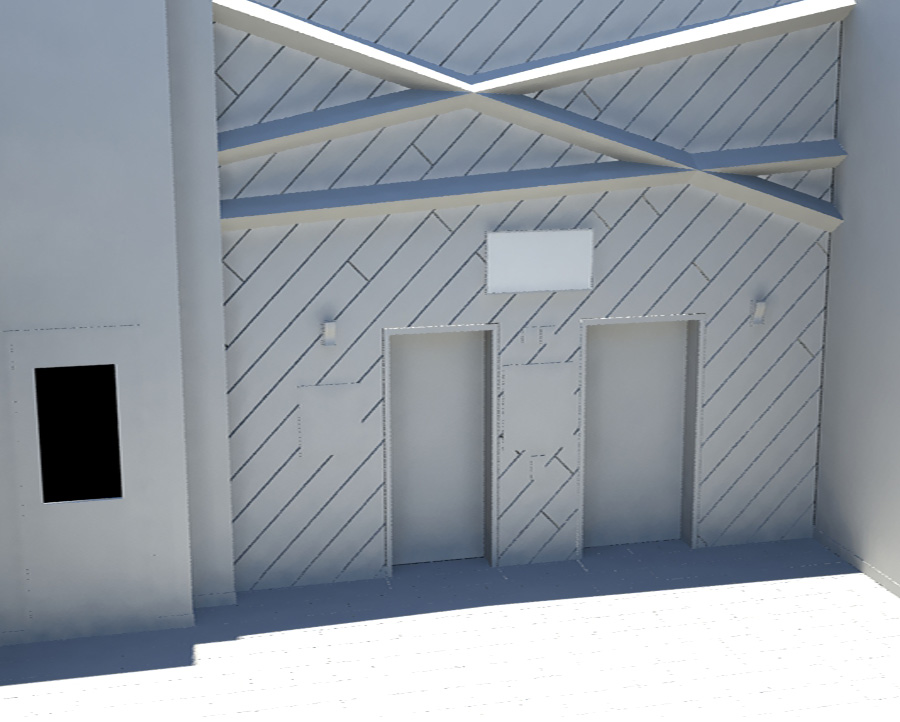 Plan ‘B’ – Hanging the Beams on the Walls 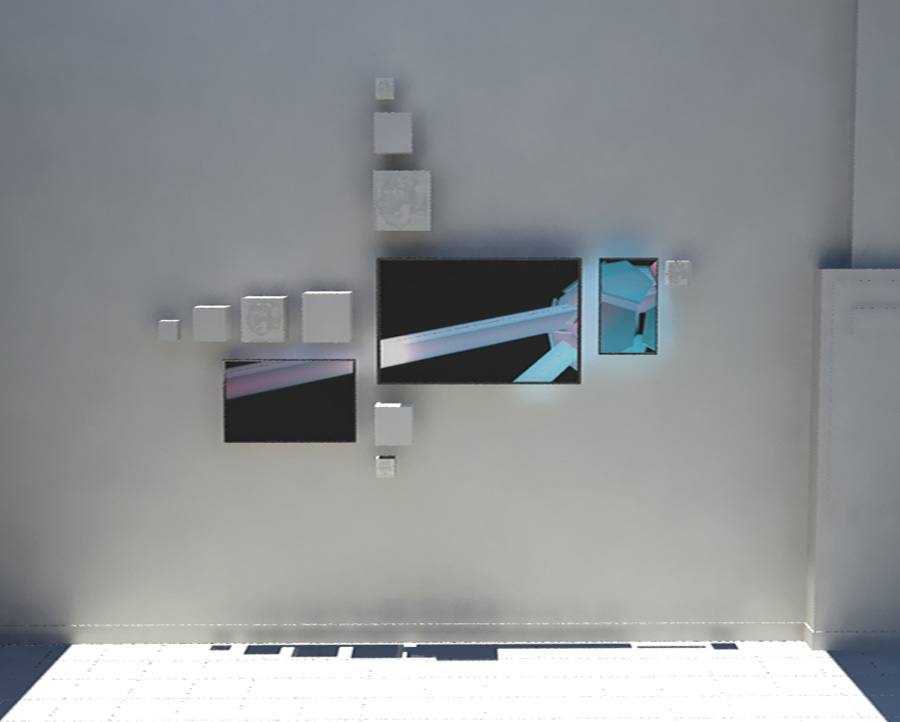 As usually goes hand-in-hand with ambition the project started to go over budget as we costed everything out. We then had remedied this by removing two of the four beams/journeys resulting in almost half the amount of materials needed, as well as simplifying some of the structure for less waste. Unfortunately though, the budget scare may have already set in motion alarm bells within the minds of our âclientsâ. In the end working with the Invest Ottawa financial officers and the building owner we were able to remove some of the budget constraints by partnering with them to provide a service such as insurance.

Creating a volumetric work that spans across the ceiling of a 10 metre long span is not necessarily trivial. Henri and I have built things before but not to this scale – but the space called out to us its necessity. And so we have had to put a great deal of effort into the planning of the how exactly the piece will be built and put up, as well as the space to do so. We have had to call electricians to install power for us, scaffolding companies to find a way to get up to the ceiling safely, as well as researching all the best materials and construction techniques for the job. Fortunately one of the City of Ottawa Gallery technicians (and amazing surrealist) Peter Schmelzer has been a great help in guiding us towards the appropriate solutions as well as using his expertise to help construct and fabricate then, in the near future, install the piece. We also had some great help from the mod lab where many electronics builders and tinkerers were able to help answer some of our questions. And finally some great help from Algonquin College for providing us a workshop to fabricate and store the pieces before we install them. 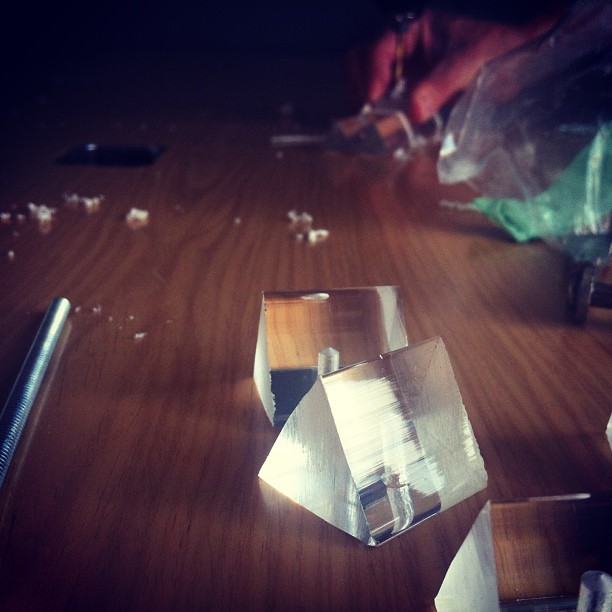 Cutting Acrylic for a Prototype

As with installing anything public-facing there are liabilities to consider, though both of these issues become hugely amplified the more complex the construction becomes. Installing screens becomes a minimal risk compared to that of extending 10m long LED light beams across the expanse of the lobby. This is something we foolishly assumed was decided upon between Invest Ottawaâs building managers and the City of Ottawa before we were even brought on board as many of our concepts from the very beginning suggested installation of elements from the ceilings and/or wall.

Upon finding out we needed to take care of this ourselves we restlessly made many phone calls to other artists and galleries such as the Ottawa Art Gallery, Cube Gallery, andÂ Saw GalleryÂ to find out where and how we would obtain installation insurance. This lead us to being referred toÂ Crain and Schooley InsuranceÂ which was immensely helpful in helping us find what we needed. In the end Invest Ottawa, the City of Ottawa, and the building owners also came together and were able to find a solution for us, which knocked down another huge barrier.

It is important to the City of Ottawa that the projects materials can be reused for future projects. If creating a work with a couple of screens and a computer the materials become highly reusable as screens, by their very generic nature, are very versatile. When using thousands of programmable LED lights, several sensors and Arduino kits, as well as many pieces of custom cut acrylic it becomes less clear. To help with this issue we had to very carefully detail how the materials we are using, especially the many programmable LEDs and controllers, will definitely be reusable for future projects.

The time required to complete a project is always an issue as one can only guess where you will be at in a few weeks or months at the beginning.; and this becomes a better approximation with experience. We have generally stuck to our schedule until the end when the approval processes became much more tangible for everyone. All seemed on board throughout the process until suddenly at the end we were scrambling to get the go-ahead from all stakeholders involved to start construction. This had lead to a 2-3 week delay in the original ending date of the project. In the end it all came down to coming up with an alternative idea, using screens as originally envisioned by the stakeholders (see Plan C image above), and sell it only to have them push back onto the original idea they already became affined to without realizing it. If only we had thought of pitching another idea sooner!

It has been a wild ride the last few weeks trying to defend and survive the concept we put so much effort and energy into; and just when we thought we may have to change gears we had some great help from all over Ottawa in helping us stay true to the original idea. We are now starting the basic construction and ordering of supplies; but due to the many hold-ups we are still behind a bit. The next few weeks will be sure to be filled with many late nights, but at least we get to go ahead with a concept we believe in.

This entry was posted on Thursday, July 25th, 2013 at 3:21 pm and is filed under Luminartists, Under the hood. You can follow any responses to this entry through the RSS 2.0 feed. You can leave a response, or trackback from your own site.