Language and the city

The 2013 Electric Fields festival is bound up in the idea and the fabric of the city. We have launched a crowd-sourced poster campaign to bring a city wideÂ conversationÂ to the streets. Check out a full description at wemakethcity.ca

Language shapes how we see and communicate about the world around us. It is both a conduite for meaning and creator of experience.* In our efforts to explore our role in making the city we must also explore this critical relationship between language and the city. Language plays a key role in a politics of exclusion or inclusion and building a more inclusive city asks us to think more deeply about language and place.

@m_melody Your suspicion is well-founded! Ping me with any ideas. Do you have a translation for âwe make the cityâ? @artengine

A recent conversation on our Twitter feed got us thinking about how to bring thoughts about langauge and the city into our We Make The City! Poster project. We would like the people of this city to help us translate âWe Make The City! We Are The City!â into as many languages as possible. We started with our francophone friends around us, and Tom Fortington and our critical writer in residence Melody McKiver got us thinking about a translation into Anishinaabemowin. How many more can join the conversation?

@TomFortington @artengine I’m an Ojibwe that needs to check with our Algonquin hosts about language use – @mymoccasins? “we make the city”?

@TomFortington @artengine but to start, there’s so many different connotations that can be found for “make” – http://t.co/TjS1KTIP8Y

There are over 200 languages spoken in Canada, so we would love to get quite a list going in the lead up to the festival. The more langauges we can translate into the more we can put on posters around the city. More than just number though we would love it a conversation about the translation of meaning and intent in language. As Melody already brought up in her tweets to us there are so many different connotiations to the word âmakeâ, what is it that we want to say?

Email, tweet or comment on this post to give us your feedback and your translations. You can also just head over to wemakethecity.ca and send us a poster!

We want to hear from you! 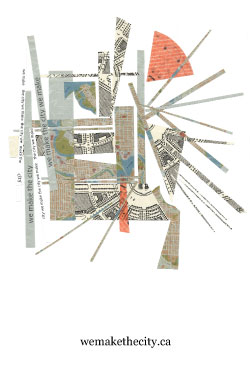 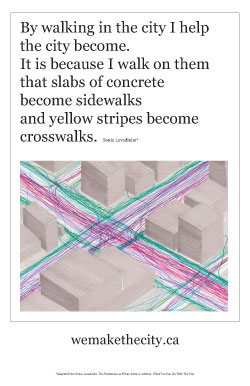 This entry was posted on Tuesday, July 9th, 2013 at 2:03 pm and is filed under Electric Fields, Ryan Stec, Artistic Director. You can follow any responses to this entry through the RSS 2.0 feed. You can leave a response, or trackback from your own site.