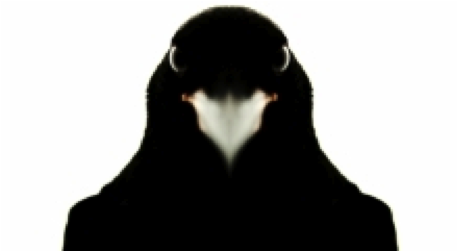 Friday evening, while exhausted from an escalating cold, I took a planned-detour on my way home in order to be immersed in beauty. I went to DAÃMÃN, where a compilation of Montreal-based artist, Ãtienne de Massy‘s work was being screened. From beginning to end I sat with an audience of captivated fans, as de Massy’s work rolled over us, story after story, in a tumbling wave of colour, intermittent melody, narrated poetry and rich visuals.

Filtered content in the form of de-saturated images and negative exposures seem to be a trademark of this artist’s aesthetic, whose labour intensive series ‘Somnia’ is a complex negotiation of footage edits and re-edits. The pieces provide whispers of what could be a documentary, cutting quickly to the realm of fiction and back again, leaving the audience in a pleasant, almost addictive, dreamlike state of confusion. His work, most certainly pushes his audience to explore sensations of nostalgia, especially with the multiplication and repetition of a visual content, which eventually garners symbolic status as the screening progresses through its motions. The young girl on camera, close-ups of eyes blinking and then cutting to fast-paced journeys, to landscapes of vacant parking lots and some of Montreal’s most bold and dominating architecture form the structure of the work.

I was most moved by ‘Somnia 3‘ which is a collage of concepts and footage that stimulate thoughts of an expanding satellite surveillance culture with hints to iconic instances in cinema that foretell this happening, such as Hal’s omnipresent eye in ‘2001: A Space Odyssey’. De Massy’s curated watchful and flickering gaze casts over forest floors, close encounters with the human body, congested and snowy cityscapes, and gives the illusion of analysed yet lush ‘wilderness’. The still shots are incrementally delayed to log status reports as the location analysis is generated across the screen in the form of ‘programming’esq’ command lines.

In observing the various cultures, cities and countries that blink in and out of de Massy’s work, I am reminded of Marsha Meskimmon’s theory on the cosmopolitan imagination, where the transindividual becomes the narrator of place, by ‘inhabiting a global world’. The artists’ work demonstrates ‘movement, change and multiplicity’ (M.M.) in the quest to anchor a sense of ‘home’ with embedded identity. This quest is noticeable in de Massy’s work but, within the scope of cosmopolitanism, his focus seems to linger on the concept of solitude within space. In doing so, he repeatedly reminds the audience of the fact that solitude is a psychological state; it is an option achieved through choice. Through practice, de Massy seems to take the stance of the voyeur, or the observatory – the man squatting on the satellite reception.

This entry was posted on Tuesday, February 5th, 2013 at 4:12 pm and is filed under Critical Resident, Megan Smith. You can follow any responses to this entry through the RSS 2.0 feed. You can leave a response, or trackback from your own site.