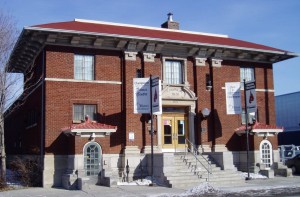 Bring your swim suit to this one-of-a-kind sound performance at Ottawaâs first municipal swimming pool. Composer and percussionist Jesse Stewart and new media artist Rob Cruickshank will perform at 10pm on Friday 25 November at the Champagne Baths, 321 King Edward Drive. Capacity is limited; advance tickets can be purchased for $10 from everybody@artengine.ca

For this performance, Stewart and Cruickshank will flood the space with percussive and electronic sounds. âI want people to be swimming in soundâ says Stewart, who often experiments with water in his work across visual and sonic media.

Stewartâs large transparent drum kit will be staged on a platform in the pool, to appear as if it is floating on water. Throughout the performance Stewart will switch from playing his drum kit to dipping other percussive instruments, like gongs, into the pool. âThe addition of water, lowers the pitchâ explains Stewart. People swimming underwater will hear these warped acoustic sounds, which will be picked up by underwater microphones, called hydrophones, floating below the surface of the pool.

The hydrophones have been specially created by Cruickshank to transport the sound in the pool back through speakers into the space. Performing outside of the pool, Cruickshank, will be relaying and electronically processing the sounds he collects from the microphones, live. His performance will also blend in his own synthesized creations to the sampled sound he will process. 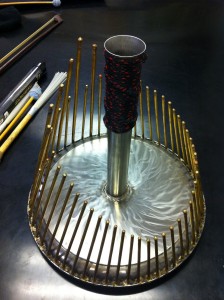 Audience members will also be treated to a performance of Stewartâs waterphone: an instrument constructed from bronze rods welded to a metal base that contains water. When struck or bowed, the vibrations of the bronze rods resonate through the hollow base. Sloshing the water around inside the base warps the sound, creating a series of eerie bent notes. The sound this instrument produces has a strangely electronic qualityâan ambiguity the artists want to harness. They will blend acoustic and synthesized sounds and physical and electronic manipulation, to the point where it will be difficult to discern the difference between the two.

Stewart and Cruicshankâs audible landscape will span from haunting electronic sine waves to irregular jazz rhythms. They have a structure in mind, but their performance will be âlargely improvisationialâ says Stewart.

When they are performing they will respond the unique sound properties of the pool with itâs echoing tiled surfaces and potential for underwater phonics. âIt is such a live spaceâ adds Cruickshank. The unique reflections and reverberations of sound, shaped by the surfaces of the buildingâs interior, the water and the audience, will determine the character of the sound audiences will hear on the night.

Stewart and Cruickshank have never collaborated before. Their pairing has been co-curated by Vague Terrain and Artengine. âAt a base level the project builds a bridge between the Toronto and Ottawa art communitiesâ explains Greg Smith from Vague Terrain; a web based digital arts publication based in Toronto. Vague Terrain and Artengine have worked on projects together before, but these have mostly been virtual. Swim Sound is the first project that has branched out into real space, and fitting with the theme of this yearâs Electric Fields is concerned with the particularities of a very distinct acoustic environment.

Stewart is an composer, musician, artist, and Assistant Professor of Music at Carleton University, Ottawa. Local audiences may remember him, and his transparent drum kit, from his performance under Barnett Newman’s $1.8 million dollar Voice of Fire painting at the NAG, or his recent exhibition of installation-based visual art at the Karsh-Masson Gallery.

Cruickshank is a multi-disciplinary artist, based in Toronto. He has been a board member at the artist-run centre InterAccess ( http://interaccess.org ) and has a deftness with electronics, which he will bring to the performance; having wired up his own underwater hydrophones and custom built the synthesizer he will be performing on.

The project has fostered some very ambitious thinking alongside creative problem solving. At one point in the evolution of the project the duo were brainstorming with architect Adrian Blackwell to put an iceberg in the pool. Shifting to accommodate the regulations that come with working in a public space, restrictions about working around water, and specific requirements of working within a historic building, as well as the complexities of remote planning, has seen the project evolve over time. It is a process that will only come to an end in the moment of the performance, making the process an experience and exploration for both the audience and artists.

The performance will last for approximately half an hour. Swimmers, please come early to change. Please note that the water at Champagne Baths is cooler than most, at a tepid 80ÂºF/26ÂºC. Wheelchair access is available, please contact Champange Baths 613-244-4402 for more information.

This entry was posted on Wednesday, November 9th, 2011 at 6:05 pm and is filed under Electric Fields, Jaenine Parkinson. You can follow any responses to this entry through the RSS 2.0 feed. You can leave a response, or trackback from your own site.