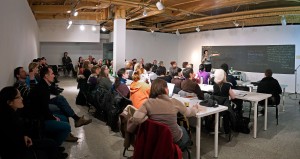 Let me begin by setting the scene…

An intriguing and topical collection I thought, and so did the, on average, 30-60 audience members in attendance for each presentation. However, the series did not live up to itâs promise. A much heavier orchestrating hand was needed to press the speakers into actually addressing the advertised topics. In the end what we really got was a history of the NGA by Shaughnessy, artist talks by Barrow and Fletcher and a rant come sales pitch by Sayej. Out of allÂ of themÂ Sayejâs was the closest any of the talks came to being instructional. Being from New Zealand my French is pretty much non-existent, so I did not attend the other two talks. But how anyone affiliated with SAW can be afraid of contemporary art is beyond me.

All that said, this series was still interesting, completely free, and offered a chance to do what (I think) is the most important professional development exercise for anyone in the arts: network. The later well lubricated with free coffee and practically free beer.

Now, for all the professional artists out there who feared they might have missed some profound revelations on how to achieve success, I have scraped together the following cliff notes:

– Listening to Daniel Barrow it seems that time spent outside the studio is just as important as time spent in it. His stint in artist-run-space administration made him realize he was good at negotiating funds. A skill that has served him well as a full time artist. He offered this rule of thumb: âkeep it impersonal and objective when asking for money.â

– As an artist whoâs material and subject matter is relationships and communities: Harrell Fletcher is not one of those artists who uses socio/political ends as a crutch to prop up his art. âI didnât want to do community based projects that are only about process. What I care about is outcomesâ he explains. Fletcherâs work is strong because he doesnât dumb down his community based work, nor will he excuse half-baked results just because ânon-artistsâ are involved.

– âJust asking participants from the community to make ‘art’ worked out terriblyâ Fletcher recalls. âSo we just looked at what they were already doing and used that; it worked so much better.âÂ  There really does seem to be such a thing as consensual exploitation, according to Fletcher, who shrugs off bureaucratic worries about the ethics of working with the public. âPeople love seeing themselves, and the things that interest them, on display.â This personal relationship to objects and images in a gallery really did seem toÂ bring in the crowds to his democratizing exhibitions. But in the end Fletcher accepts that âthings revert back to the way they were, for the most part.â 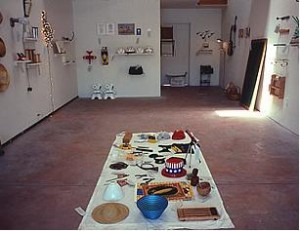 – Working and enabling untrained artists has earned Fletcher, and some audience members, a lot of flack. âYeahâ Fletcher retorts âbut art is not surgery, you donât need to be trained. Sometimes training can do more damage than good, especially when you are left with a lot of debt.â

– Down-to earth, plain language and a personal approach was unanimously supported for seeking coverage in the media. Sayej screwed up her nose at the mention of artists statements with their tendency for waffly mumbo-jumbo. âWe donât use words like ‘postmodernism’ unless we are making fun of themâ she quips. âCurators donât even read [artist statements]â SAW curator Stefan St-Laurent chipped in from his seat in the back. 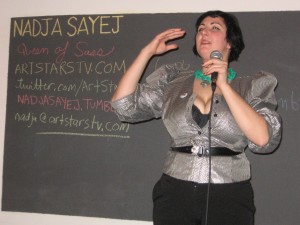 – I jotted down a plethora of sound-bites from Miss Sayej on the topic of self-promotion. Let me share some with you: âYou canât go overboard.â âYou have to have fun with it.â âYou have to be willing to stand out; it has to be about more than just your art.â âHave the balls to reach out to the media.â âWork that angle.â âThe most dangerous place to be is in your comfort zone.â âPeople donât dream big enough.â What it all boiled down to, for me, was encouragement to approach those writers and critics who cover your niche and make a personal approach that feeds them a story.

– Known for her confrontational interview style on ArtStars* there were many questions for Sayej about interviewing. âHave a planâ she advises. âMake a list of things you do and donât want to talk about.â Then, she suggests, fill your interview with anecdotes, like stories behind the work, or how you came to be an artist. âAt the crux of it,â she reminded us, âart is entertainment.â

– There were some nice contradictions between the examples set by speakers. For instance, Sayej balked when one audience member asked what Tumbler was. Contrastingly, and surprisingly for an artist who self-identifies with the term âsocial practiceâ, Fletcher doesn’t use social media. Such contradictions came to emphasize for me, and other audience members, that there are many art worlds, many ways of working and many paths to success. But, I would add, most of those paths are paved with strong personal relationships, founded and built atÂ  events just like this one.

This entry was posted on Wednesday, March 30th, 2011 at 3:18 pm and is filed under Critical Resident, Jaenine Parkinson. You can follow any responses to this entry through the RSS 2.0 feed. You can leave a response, or trackback from your own site.