Last Wednesday’s meetup was a busy one- Andrew Plumb brought in the Lego-compatible disc buttons he created for wearable circuits along with skeletal Lego cages, one of which is designed to be printed out with working hinges!

The disc buttons snap together and have small holes thoughtfully placed with which one can put conductive thread or wire through to make a circuit, should one so desire. Justin Dempsey (on the right) took some eyeglass frames, punched out the centers, added infrared emitting LEDs to the sides and set up a Wiimote to sense the light emitted while communicating the coordinates to his laptop via bluetooth as the start of a crazy awesome 3D bike-carrier game. 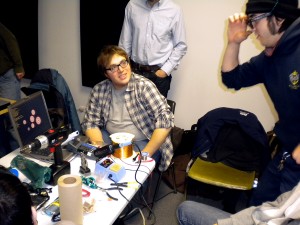 He has plans to work more on this game at the Global Game Jam happening this coming weekend at Carleton. The Global Game Jam is the world’s largest game jam event occurring annually in late January and brings together thousands of game enthusiasts participating through many local jams around the world. Another project worked on during the meetup was a soft circuit elephant named Salt n’ Peanut that Syuzi of Fashioning Tech fame created for a Maker Faire.

The kit uses conductive thread to join the positive and negative ends of the battery in a larger elephant to the LED inside the body of a baby elephant. The two elephants complete the circuit by holding each others trunks. Such a powerful message behind such a simple circuit!

This entry was posted on Wednesday, January 26th, 2011 at 3:20 pm and is filed under Emily Daniels. You can follow any responses to this entry through the RSS 2.0 feed. You can leave a response, or trackback from your own site.