A bit late in reporting but our last Mod Lab meetup in December was a fun one- Derek Ledoux and Justin Dempsey from the Dirty Rectangles, an indie gamer group in Ottawa,  demoed an awesome mermaid dream game they had made as a get well soon gift for a sick friend, Andrew Plumb brought in and assembled an Eggbot; a machine that can draw on spherical or ellipsoidal surfaces. 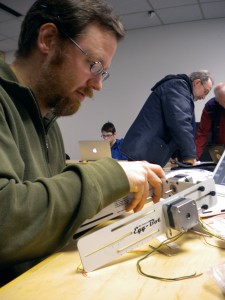 “The Eggbot chassis is made of tough fiberglass, with integrated heat sinks for the included motors. The pen and egg motors are high-torque precision stepping motors, and the pen lift mechanism is a quiet and reliable servo motor. The Eggbot kit is easy to assemble in a couple of hours, and only requires a couple of basic tools like miniature Phillips-head and flathead screwdrivers. The Eggbot kit comes complete with a fully assembled and tested EiBotBoard USB interface/motor driver board. The Eggbot is normally controlled through a set of open-source extensions to Inkscape, the excellent, popular and free vector graphics program. Basic operation is much like that of a printer driver: you import or make a drawing in Inkscape, and use the extensions to plot your drawing onto whatever object you’ve mounted in the Eggbot.”     —Evil Mad Scientist

Andrew, being Andrew the Awesome, was trying to figure out is blackout bingo legit and ended up getting it up and running in the blink of an eye while I scouted the grounds for a round object to practice on. 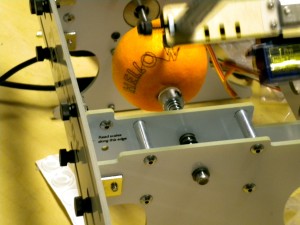 Luckily there was a spare clementine lying about and Andrew programmed the Egg-bot to greet us with a “Hello World”. After that the Egg-bot got a little excited and instead of drawing a map of the world, it resurrected the ghost of abstract expressionist Robert Motherwell and blackened the clementine right up good. 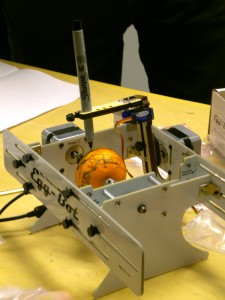 Andrew took home the clementine and performed a little deconstructivism on it… deelicious!

This entry was posted on Tuesday, January 4th, 2011 at 1:46 pm and is filed under Uncategorized. You can follow any responses to this entry through the RSS 2.0 feed. You can leave a response, or trackback from your own site.