Review: Queen Elizabeth in 3D, CBC, premiered September 20, repeated September 22 & September 25, now on my TiVo foverer for when we have company, and on the CBC Website 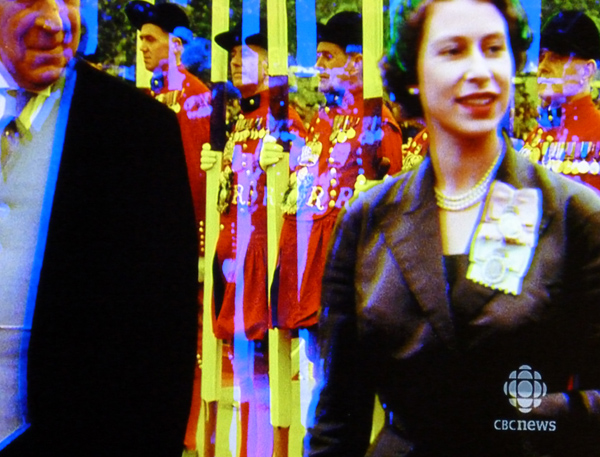 The attendant at the Post Office seemed royally defeated. She had seen Queen Elizabeth in 3D one week before I showed up asking if they still had free 3D glasses. I had TiVoâd the broadcast and watched it without the special eye-wear as I was promised at the beginning of the show there would be stuff for me too: âIf you donât have 3D glasses, thereâs still lotsa spectacular footage to seeâ. Back to the Post Office, this poor women had probably been quite the cheerleader for the world premier offering the glasses to anyone showing up at the counter. Â But she had been less then impressed with the program and in retrospect it seemed she regretted hyping it so much.

The lead-up (the story of the found footage) to the actual 3D footage is slightly annoying but I guess necessary when one needs to stretch (what seems like) 4 minutes of 3D footage into one hour of TV. The 3D footage is nice, although crowds shots, which there are a lot of, are not that interesting and seem, well, flat. The Queen in 3D, and I mean the actual Queen in 3D, up close, which you see somewhere midway through the broadcast, is really very nice.

Not in 3D, but well worth mentioning is a black and white short clip of the princess reading her pledge, looking strait in the camera. Also worth noting, the part where the story of her coronation – which was a big deal Â – and its meaning is told. Â TV set sales rocketed for the event even though she became queen in 1953 at a time when Britain was still âdead poorâ.

This entry was posted on Tuesday, October 5th, 2010 at 10:48 pm and is filed under Crystal DorÃ©. You can follow any responses to this entry through the RSS 2.0 feed. You can leave a response, or trackback from your own site.