Martin Messier and his work for dance company O Vertigo.

It is a bit of challenge to contain my interest in the work of Martin Messier into a single blog post. He has an amazing list of dynamic and exciting projects, and Iâm sure you will hear more about him blog posts to come. For now I am going to focus on some recent work he did with O Vertigo, a dance company in MontrÃ©al, for their new show Onde de choc. 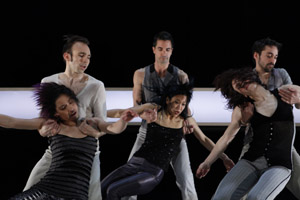 I made the trip down to see the new choreography by Ginette Laurin, as a close friend (the fantastic and talented James Phillips) was doing his first performance with the troop. The icing on the cake was that Martin Messier was working on the music for the piece.

Onde de choc is fantastic, and the choreography, the dancers, the lighting design and the sound work together in an inspiring way. While I understood that the overall creative vision of the piece was driven by Ginette Laurin, the sound work seemed so on pace with Martins unique touch it drove me to speak with him further about his experience with O Vertigo. I finally got the chance to chat with Martin this week about his work on Onde de choc, so I offer up some of that insight here for our blog.

There where two very different composers involved in the production of Onde de choc. Acamdey Award winner Michael Nyman created more cinematic elements for the piece and was involved mostly at the early stages, while Martin Messier came in later to work on more abstract contributions. Two of the most captivating sonic elements of the piece are the large wooden box (maybe 15ft long, 4ft wide and 2ft high) equipped with 10 contact microphones and two wireless heart monitors. Both of these elements are integrated into the dance in simple and direct ways. 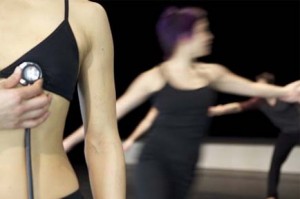 The sonic box was actually constructed before Martin was invited to join the team, but the fit with his existing practice was almost perfect. One of his currently touring performances, called LâHorloger, consists of a small surface, equipped with contact mics, on which he arranges and rearranges a series of wind up time devices. As he described the production process with O Vertigo it seemed evident that this alignment with his personal work created a more relaxed approach to the piece. Rather than build concepts and processes from scratch Martin was able to adapt many of his sound manipulations to this new presentation context. LâHorloger is an intimate piece, a kind of abstract portrait of an obsessed clockmaker, where the composer is also the performer. For Onde de choc, Martin is removed from the performance process and works in support of the choreographer, who has already defined the movements that will play out on the sonic instrument. Â As Martin described to me, the sonic result of the choreographed movement was not Laurinâs primary focus, and so the palette from which he could draw was limited. But as is the case with many limitations artists experience, it can bring out the best in you.

While it seems obvious to state that movement plays a primary role in dance, it seemed that this simple notion played a key role in the decision to do very little processing of the sounds form the box. The interplay between the real sounds and the processed and composed elements is at the heart of much of Martinâs work, but in this context the idea was to direct more attention towards the movement and not lose it in abstraction. Martin describes much of what he did as auditory focusing or selective amplification. But this simplicity is perfect for the work, and the box, and his sound design, bring us into a very intimate space with the movement of the dancers. From this intimate space beautiful gems emerge. Martin described one of his favorite moments where the dancers slide across the full length of the wooden box. The sound pushed out to you is a massive amplification of the most subtle noises, but it seems totally natural, as it matches the grand gesture of the movements of the dancers. As they fling themselves across the stage the box works like foley in a film creating a kind of super reality.

Another gem that Martin held onto was a duet with the wireless heart monitors. The heart monitor is held by one dancer and the stethoscope part is placed on the second dancers chest. The second dancers heart beat is heard through the PA of the hall, and the first dancers moves to the rhythm of their partners heart. It is simple and direct, but very touching. During the Q&A afterwards the first dancer described how challenging this process was. With every performance and rehearsal this duet changed dramatically. On opening night the second dancer was full of nerves and his heart was pounding like a breakcore track, then on the night they had just done it was far more mellow, and so the tone of the dance depended entirely on the state of the partner.

The quality of this whole of this production is a great expression of the creative vision of Ginette Laurin, and the exciting possibilities that cross-disciplinary work in a dance context. Martinâs contribution to one of MontrÃ©alâs most respected and exciting dance companies is hopefully noted by others beyond our blog readers. He is doing fantastic things with sound, and Iâm sure we will bring you more of his work at Artengine and on the blog here.

Related links after these videos…

L’HORLOGER from Martin Messier on Vimeo.

A review of the show from a dance perspective at Indyish.com

Another review at ballet.co.uk included as much for its content as its URL.

Could have gone with Michael Nyman’s official site, but you probably want his IMDB page.

And I think James Phillips, the contemporary dancer, should get a Wikipedia page along with these people.

This entry was posted on Monday, July 19th, 2010 at 9:01 am and is filed under Ryan Stec, Artistic Director. You can follow any responses to this entry through the RSS 2.0 feed. You can leave a response, or trackback from your own site.