Riled up? Act up! Art and hockey

If I hit a puck with a stick, does it make me a hockey player? Saying that I am would be the equivalent of a typical comment we in the arts hear constantly when talking about experimental art-making âI can do that.â Common sense tells us that there is more beyond the immediacy of whatever weâre looking at, and though we donât always take the time to look beyond the basic aesthetic (Primary-school indicators: sad, bad, happy, angry, joyous, touching, beautiful) and really spend time with something that at first glance may be confusing, Iâve never seen a more captivated audience, as I did the evening of May 12th at Daimon art mÃ©diatique et photographie in Gatineau. 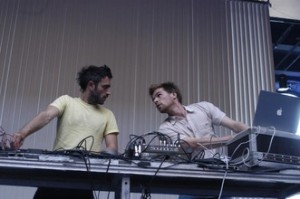 Daimon featured Akousma, a festival for electronic music, to devise a program of three sound performances. The first performance was by the Ottawa-based group If Then Do (i.e. If then do it ourselves) comprised that night of Simon Guibord and Nathan Medema. Sitting in the dark at a table to the audienceâs left with two open-faced macs we could only see the illuminated faces of the performers. The collective say they often begin by collecting sounds from various sources, build a kind of sandbox, distort the form and thus create a platform for their performance. In realtime, they select one of those manipulated clips and chose another to follow it, then another, and so on and so forth. A friend sitting next to me who has an extensive background in sound art could determine what software they used, the original audio, whether it had been manipulated, and even the trajectory of creation in their performance. To me, the sound art newbie, the three sound performances acted as chapters to a narration rather than being completely disconnected from each other. If Then Do describes their interest in sound art as breaking free from composition all the while being enamored by it. They do not use MIDI but instead prefer to âaffectâ their sound landscape before the performance, and then use them as launching pads for the piece. The ephemerality of the sounds had the same effect for my own thoughts. One sound brought me to a distinct memory, and then another broke it apart and floated me above that thought. As in meditation your mind wanders all the while remaining focused and present within your body. The end of the performance suddenly gets interrupted by vulgar claps, oh right, here I am. 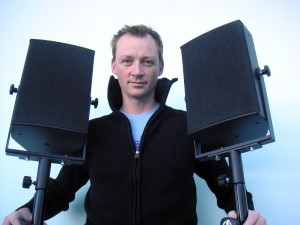 Louis Dufort stood from his audience chair and repositioned himself in the front row, still sitting with us, but in an even darker setting this time. Performing two pieces Materio and Nervures, the artist peeled back the layers of what I learned is called âconcrete musicâ. Dufortâs performance was like having something on the tip of the tongue, but not being able to say it.Â  The sounds explored the physical space even more then in the previous performance, and seemingly directed at the front of the audience, as if there were an invisible canvas and the sounds of rain, water, air, splashes and glops of paint were being slapped onto it. The first piece was like experiencing what wet sounds like. Distinct clips became so tactile at some point I had to look in their direction to identify the visual that would go along with it.Â  Made me wonder if we need to see to believe in it, as if hearing isnât proof enough. In this case, do we prioritize one sense over the other? Hhhmmmm I knew it. Synesthesia rears its head once again. End of performance, vulgar claps.

The important difference with the last performance of the evening, lâHorloger, is artist Martin Messierâs use of objects in this real time performance. The artist sat at a school desk with a mysterious suitcase next to him atop a chair. On the surface of the desk was a tablet with sensors onto which he would move around, grate the surface with, and then turn clockwise or counter-clockwise, place either aggressively, or extremely delicately various bedside alarm clocks. At each movement, the audio tablet would amplify the sound and resound through the space like the authoritative church bell, or the surprisingly loud skate board wooshing by on the pavement. In some cases, he would capture the last movement only to juxtapose the next onto a few seconds of improvised recording. The room was dark with only a spot lighting the performance, and in the golden stream of light the sounds seemed to escape, float up and co-mingle with the previous clips that still remained in the air. There was an interesting paradox of materials and formats in the performance; an analogue object recorded digitally, and then conveyed a very mechanical sound. I didnât sense a narration or a particular feeling like in the other performances, though I did go through the sounds almost as if my mental audio library was being consulted. At once reminiscent of church bells, and in other moments a morning wake up call, the mental associations were blatant and loud. *Alarm clock ringsâ¦ âResponsibility!â *grating clock face on the table reminiscent of drums or a distance train âNostalgia and loyalty!â It was all very vintage. End of performance, vulgar claps. 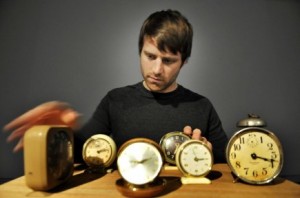 Could I grate a clock on that audio tablet? Yes. Could I manipulate sound clips and then select them at random for an audience? Yes. Could I grab raw sounds and stream them live? Yes. In the 45 minutes performances, time flew and was thoroughly felt at the same time. Even if I can technically âdoâ what these artists are doing, there is no way in hell it makes me a sound artist. Iâve experienced audio performances in the past that treated sound as a decidedly random source, and in result felt patronizing. I feel as though Iâve just scraped the surface of this interesting genre through the Daimon and Akousma event. I feel like I felt 3 years ago when I was at a John Cage tribute show at the Fisher B. Center for the performing arts in NY; positive that Iâd just experienced something important, complex, and worth immersing myself again even if I had no idea what âitâ was. I think Iâm going to like sound art. Vulgar claps, time to go watch the hockey game on a TV in the gallery lobby.

This entry was posted on Wednesday, June 2nd, 2010 at 10:14 am and is filed under Mireille Bourgois. You can follow any responses to this entry through the RSS 2.0 feed. You can leave a response, or trackback from your own site.