Showdown in O’Town (from the sharp mind of Steve Loft)

And so began, Electric Fieldâs first ever debate on our place as artists and creators in a technological world.

Are we masters of our technological world, or have we become the âtools of the toolsâ? 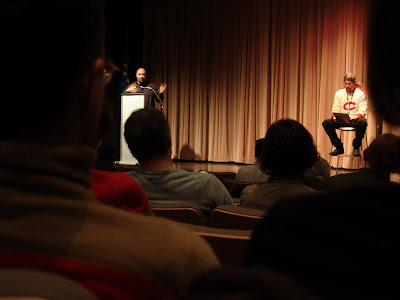 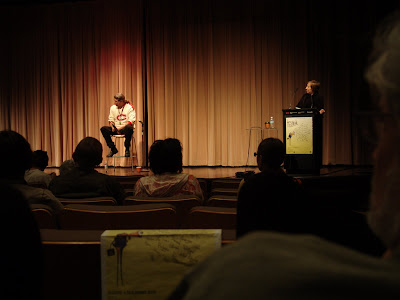 Noted theorists/artists Dana Samuels and Jason Lewis squared off in a head to head battle to determine essential truths about the role of technology in film and art. Is it a liberation force enabling the best in us? Is it a tyrannical evil keeping the worst in us in the drivers seat.

Nicknamed (okay, only by me), âthe donnybrook on the Rideauâ, it was conceived as a fun, and engaging way of presenting a topic near and dear to all our hearts; our nuanced and complicated relationship to technology, especially as it pertains to artistic creation, examination and dissemination. Sure itâs a daunting subject, but our two distinguished combatants were more than up to the task.

For Concordia University professor and artist Jason Lewis, âIt’s an unmitigated evil. All art should be producible with only that equipment with which we were born. Millennia of unhealthy fascination with ‘instruments’ and ‘technology’ have led us to neglect the
development of the tactile and olfactory arts in favor of the auditory and the visual. We must resist the “cancerous growth of vision”!

Not one to let that challenge go unheeded, artist and director of Interacceess Media Arts Centre Dana Samuels responded with a vehement defense of technologyâs more noble attributes for artistic productionâ¦and the fight was on. Everything from the printing press to youtube were fair game as our debaters wrestled with the weighty presence of complex t(and not so complex) technologies in our everyday lives.

Covering a wide array of topics in contemporary arts practice, these two nimble minded warriors of disputation navigated myriad issues in technology based art and its history and future. From publishing to television, filmmaking, visual arts and craft, our predilection for using technology was mapped and negotiated by our two intellectual pugilists.

Because the format challenged the participants to respond to one another, as well as taking questions from the moderator and the audience, the discussion took some interesting twists and turns. Both participants showed extensive knowledge of the topic and engaged in a lively and spirited contest.

The audience were quick to join in the conversation and further enlivened the fascinating debate.

Although no âwinnerâ came through (that was never the point), the âdonnybrookâ (I refuse to give up on that title!!!!) provided an interesting point of departure as we examine our complex and at times perplexing relationship with new technologies.

An informed, lively and impassioned debateâ¦accessible and topical. Plusâ¦it was good fun. 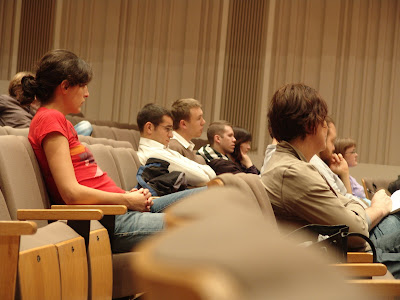 (Okay, so they don’t look like the are having capital “F” fun, but that is because they are so engaged in the gripping words of the debate.) 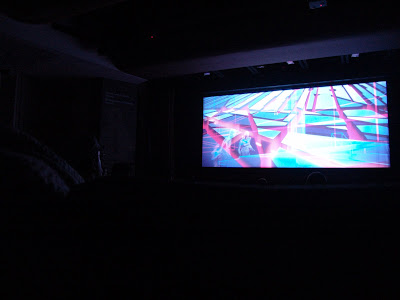 Some stills of Tron, because it was that pretty, and truly fun to revist technological perspectives pre-internet. What was really great about the screening was that there was actually alot of the sentiments referenced in the debate echoed in the film. Not with any real depth, but interesting to see the persitence of certain notions about new technology in society.

Oh yeah it was also cool to see the Main Frames thug get projected 20 feet high when he gets the miracle grow powers from his master. Although below here it looks more like something a bit more risque is going on. What exactly Tron is doing with his head there i’m not sure. 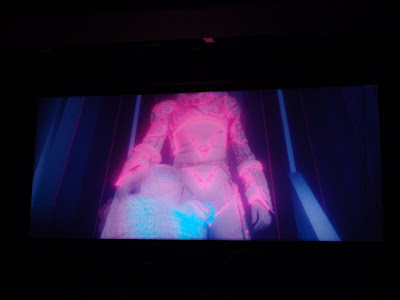 This entry was posted on Friday, November 21st, 2008 at 3:24 pm and is filed under Uncategorized. You can follow any responses to this entry through the RSS 2.0 feed. You can leave a response, or trackback from your own site.