The Problem with Digital Art is the Future

â[New media art] questions everything, the most fundamental assumptions: What is a work? How do you collect? What is preservation? What is ownership? All of those things that museums are based upon and structured upon are pretty much thrown open to question.â – Jeremy Strick, Director, Museum of Contemporary Art, Los Angeles

In 2004, I walked around the harbour in Helsinki just as the ISEA ship passed by. ISEA is an acronym for The Inter-Society for the Electronic Arts (now ISEA International http://www.isea-web.org) and their conference was taking place on a cruise boat going from port to port on the Baltic Sea. Coinciding with the conference, the exhibition Wireless Experience at the Kiasma Museum of Contemporary Art (http://www.kiasma.fi/) in Helsinki was meant to highlight innovative digital art from around the world, but was ultimately frustrating for the gallery-goer: a third of the installations had signs in front of them apologizing for temporary shut-downs. This illustrates my continued concern with digital art in that the technology is still a major obstacle for many public and private institutions because it is so unique, custom-made or never-done-before. Few are the gallery technicians and media specialists who can solve every problem (local wunderkind Ken Campbell might be an exception) â a single exhibition can feature all at once works made with obsolete, existing and new technologies. 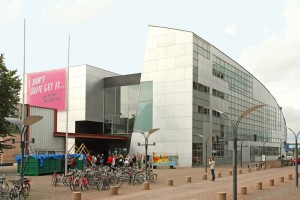 As part of Electric Fields (www.electricfields.ca) some years back, I curated a group exhibition of digital media that had periodic breakdowns that were very difficult to control. For an artist-run centre like SAW, the cost of mounting and maintaining complex new media installations over the course of an exhibition is an incredible challenge, and I would only do so again if more human (and technological) resources were made available. And even then, I would expect failures, and prepare in advance a sign stating âThis installation is currently under repair. We apologize for any inconvenience.â Already that technicians are becoming exceedingly rare as new media becomes omnipresent, art institutions as big and as small as Kiasma or Galerie SAW Gallery may not be well prepared (or properly funded) to deal with the influx.

Many new media artists I know have expressed varying levels of contempt for galleries due to their lack of knowledge and interest in regards to digital arts forms. Having attended many IMAA www.imaa.ca (Independent Media Art Alliance) conferences in the past, I see today a still palpable divide segregating the media arts and the digital arts, even though they are often intermingled. There is a feeling that digital artists are generally underserved by granting agencies, curators, conservators and collectors – this reminds me of how long it took for artistic institutions to embrace video art and installation, only in the mid 90s did we see a proliferation of this work even though had existed for many decades prior. Despite these advances, collecting and preserving media art continues to pose challenges. The National Gallery of Canada established a video art collection in 1988 with a dedicated curator at the helm. That position has long been abolished and the preservation of that collection is an on-going source of debate.

Elsewhere in Canada, prospects do not seem much better: The once heavily philanthropic Daniel Langlois Foundation (http://www.fondation-langlois.org) has massively scaled back its conservation and collecting efforts and the CinÃ©mathÃ¨que quÃ©bÃ©coise sent out an SOS claiming they were on the verge of bankruptcy. As costs for preservation and conservation are rising, and public and private funding is flatlining or disappearing, media and digital art works take quite a beating. In the study The Challenges of Digital Art Preservation (http://www.e-conservationline.com/content/view/884/296/), Lino GarcÃ­a and Pilar Montero Vilar speak to this problem:

â…it contains an additional ingredient that accelerates its expiration date: the uncertainty that produces its own development. This continuous process of technological versioning makes that todayâs fashionable tools will lose their support tomorrow. When any element of the complex digital skeleton of a work fails, and there is no technical support, it inevitably dies.â

Successful European models such as ZKM www.zkm.de (Centre for Art and Media Karlsruhe) and British Film Institute may be useful institutions to look at from a Canadian perspective, to start imagining large public media art and digital arts institutions that both present and preserve the consequential works of our time, crucially the Canadian work. At last count, ZKM had 12 full-time media technicians, 3 digital art and media restorers, countless temporary and permanent curatorial staff.Â  The challenges are certainly not insurmountable â at the very least, a national preservation strategy has to be implemented, and should include plans for a media art bank, a new media art museum and increased investments from a variety of departments.

SAW Video (www.sawvideo.com) recently collaborated with The Canada Science and Technology Museum to mount an exhibition of 80s video work, presented alongside the now antiquated equipment used to make them. This exhibition highlighted the importance of conservation, preservation and collecting in the media arts â some may not know that SAW Video houses a collection of hundreds of works made in Ottawa by some of Canadaâs leading media artists. Production centres across the country hold similar collections, depositories of significant media art works that are for the moment taken care of with minimal means.

In Canada, we risk losing some of the most significant, telling work of our time, erasing a part of history that will be an essential link to the understanding and appreciating what will come next in our increasingly digitized world.

This entry was posted on Friday, October 19th, 2012 at 10:59 am and is filed under Uncategorized. You can follow any responses to this entry through the RSS 2.0 feed. You can leave a response, or trackback from your own site.