We are not a creative city!

A great conversation is unfolding in the city of Ottawa. The municipal government, local bloggers, culture institutions like Galerie SAW Gallery, social innovation centers and even major media outlets have all endeavoured to help weather a perceived cultural adolescence in the city. What are we? and what can we become? are key questions in growth and development, and we are hoping to add our voice to the dynamic conversation.

This post begins an online conversation between myself (Artengineâs Artistic Director Ryan Stec) and Cultural Planner, DJ, Blogger and urban thinker Kwende Kefentse. Over the month of August Kwende and I will be posting entries in response to one another’s ideas in an evolving conversation about city branding, identity and the civic role of art. 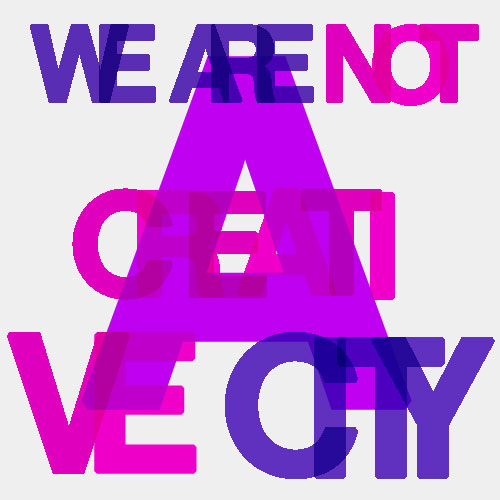 In true Canadian tradition of discussions on identity, I would like to begin this conversation with a few notes about what we, Ottawa, are not. We are not MontrÃ©al or Toronto. We are not an industrial powerhouse. We are not a financial hub. We are not a cultural center. We are not a creative city and perhaps most importantly we are not a brand.

The language and methods of commercial branding have steeped themselves deep into the strategic planning of most cities. The Creative City idea has fed off this trend, creating a juggernaut concept that is impossible to avoid in discussions around civic identity. If one believes that western urban centers must redefine themselves to be included in the new âcreative economyâ, then being a Creative City is not just seductive, but also a matter of survival. Although I donât consider the problem to be specific to Richard Florida and his Creative City research/concept/index/etc, but with the underlying idea of city branding, what is interesting to me about the Creative City trend is how cultural organizations (myself/Artengine included) have participated in the branding process. What I feel needs to be considered is – What might we be losing when the cultural life of the city becomes a component of its brand, rather than integral to the life of its citizens?

Different components of city life are prioritized for how they add value to the brand. Within the cultural sector we have had a multi-layered approach that defines our value-added qualities. The most obvious, and easily understood, is the service we provide to the prized âknowledge workerâ. A vibrant cultural sector is understood to be key to attracting the fluid and mobile knowledge-based workforce, and culture producers tend to desire this educated and affluent audience. Beyond this however, cultural organizations across the country have sought to establish economic legitimacy for culture in its own right. If we monetize the impact of culture we can establish ourselves not just at the service of other economic pillars, but as a key pillar ourselves; leading to actualization from culture as a component of civic life to a âcultural sectorâ or âcultural industryâ.

City branding reframes the discussion on the quality of civic life through a commercial lense that devalues key components of what a city really needs to be for itâs citizens. Brands are constructed to seduce outside investment, tourism and general perception. City characteristics are considered on how they add value to the brand, not the city itself. Â My concern with the growing trend in the monetization of cultural value is not only that it contributes to this larger reframing of civic life in terms of brand value, but that it positions the discussion of cultural value outside the language that is most important to cultural production itself. If we acquiesce to a dialogue about cultural value primarily outlined in economic terms, arenât we moving away from the most powerful potential of culture to enrich civic life and to be relevant to a broader and broader public?

There is a great deal to be unpacked about the relationship of art and the artist to the greater public, and at the heart of my argument may be a somewhat romantic notion of the potential of art. However, this is not an argument for the intrinsic value of artistic pursuits. It is a challenge to cultural institutions (including my own) to figure out how to make oneself relevant to the city you are grounded in. This requires us to think critically about the city we are in, or better said – the city we are a part of. What is that city really like? How do we act within it, both as reflectors of its character and agitators of its operation, in a way that makes it richer and more complete? How does the art we produce and present engage the public as citizens rather than only audience?

I pass the platform now to Kwende. I donât expect him to answer these questions, as they are certainly a bit ambitious, but perhaps to consider the direction and growth of the cultural life of this city as he sees it. I look forward to reading his feedback, and I hope you return next week to do the same!

PS Here are some links to local blogs and other research sites that consider ideas about Creative City and city branding.

Not in our name, Hamburg resistance position
http://www.signandsight.com/features/1961.html

Historical analysis of NYC branding efforts of the 1970s
http://brooklynrail.org/2008/05/express/branding-new-york

This entry was posted on Friday, July 27th, 2012 at 12:22 pm and is filed under Ryan Stec, Artistic Director. You can follow any responses to this entry through the RSS 2.0 feed. You can leave a response, or trackback from your own site.

7 Responses to “We are not a creative city!”