Tonight, from 10pm to midnight, A Tribe Called Red will be performing in the Grand Hall at the Canadian Museum of Civilization (CMC) in Gatineau.The three DJs that make up A Tribe Called Red are Bear Witness, Ian Campeau (a.k.a. DJ NDN) and Dan General (a.k.a. DJ Shub). MTV has dubbed them originators of their own genre called âelectric pow wowâ or âpow wow stepâ formed from a remix of traditional pow wow music with club beats. The group has developed a solid following in Ottawa and beyond, throwing monthly dance parties sampling from a broad catalogue and accompanied by projections of videos composed by Witness. 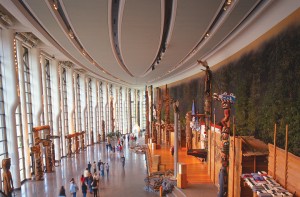 There will be no video component for this performance because, as Witness explains âthe general idea for Electric Fields is to find different ways to work with spaces and any screens would take away from this.â Instead the group are going to realize an idea they have been thinking about for years now. âWhen this project came up it was an opportunity for us to try out a bunch of things that we have been wanting to doâ says Witness. They will arrange themselves and their gear a small circle in the middle of the dance floor, as apposed to being on stage, which is their typical setup. âWe are going to be setup with our backs to each other and people are going to dance around us, like at a pow wow, where you have a drum in the middle and people dance aroundâ explains DJ Shub.

For this performance they will also be working with a singer, Rhonda Doxtator, who is one half of the Pimadiziwin Singers. âWeâve never played a show with a singer before, who is going to be singing with us live, so that is going to be excitingâ says DJ Shub. Doxator has performed with A Tribe Called Red in the past as a dancer, but for this night she will feature as a live vocalist for a few of the songs. 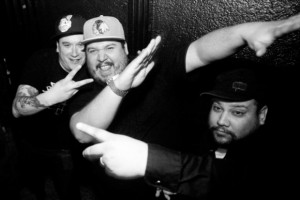 The group are navigating the gap between the interests of their club crowd and an arts crowd. âWe are going to shake up the CMC, like literally.â says Witness âOur music tends to do that. We want to shake those archives up. Shake âem old bones. Itâs like we are going in there to play for those people, those energies that are stuck in that space. It is going to be a lot different energy than playing in a club…It is such a charged space, being in the CMC, the history of the CMC and all the artifacts, belongings and well, people who are housed there. It is an interesting space to take over.â

With three DJâs playing at the same time, they alternate at taking the lead with DJ Shub adding scratches and flares using more âtraditionalâ turntables. âWe work as a group, more than three DJs on stage doing their own thingâ says DJ NDN âSort of like a band almost, but not really. We are all improvising with our own instruments.â 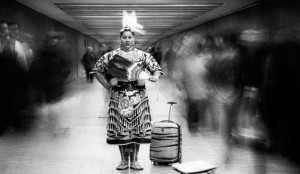 To date, A Tribe Called Red have released one single; Red Skin Girl. âThe reason we only have Red Skin Girl out as a single is because it is the only one we have licensed to use the samples for. And that is why we give the rest away.â Red Skin Girl is a remix of a round dance song by contemporary pow wow singing group, Northern Cree. In addition to the vocables in traditional pow wow, round dance often includes English lyrics; stories of love and heartbreak. A Tribe Called Red have used the distinctive two step swing of round dance, speeding it up, adding layers and bass. You can listen to it here: http://soundcloud.com/a-tribe-called-red/red-skin-girl-atcr-remix

DJ Shub explains that âwith any type of sampling music it is always difficult and expensive to get cleared. But there is light at the end of the tunnel because our manager has come to an agreement with Cannon Records, so hopefully they will be opening up their catalogue for us.â Witness adds: âthe next step now is to start recording. So we are bringing people in to do studio sessions so we own all the tracks, and get out of having to license samples.â For now, you can download their music for free from SoundCloud: http://soundcloud.com/a-tribe-called-red

As recordings of pow wow music only go back 40 – 60 years, with the cultural ban only being lifted in the 1960s, most of the source material they want to work with is still under copyright. âBefore that people were part of sideshows and wild west shows and could perform as part of that, so things survived. But as far as what you could do in your community…nothingâ explains Witness. A lot of archival material exists in the US, in institutions such as the Library of Congress and the University of Indiana. The group are interested in exploring these older archives and just did a project with UCLA, where they were sent digital copies of recordings taken in the 1930s and etched onto wax cylinders. Their result, General Generations, can be heard here: http://ethnomusicologyreview.ucla.edu/journal/volume/16/piece/471

Tickets are $10, available from Artengine and there will be a cash bar.

This entry was posted on Friday, November 25th, 2011 at 11:54 pm and is filed under Critical Resident, Electric Fields, Jaenine Parkinson. You can follow any responses to this entry through the RSS 2.0 feed. You can leave a response, or trackback from your own site.