Roger Tellier-Craig will be one of the three performers showcased tomorrow night at 9pm at St Brigidâs Center for the Arts a part of Electric Fields. Two other performances will be Martin BÃ©dard and Jean FranÃ§ois Laporte. The line-up has been orchestrated through collaboration between Artengine and MontrÃ©al based electro-acoustic festival Akousma.

For Electric Fields Tellier-Craig will be performing live with a late 1970s Roland analogue mono-phonic synthesizer, blended with tracks from his new record Fictions. The structure of the music is computer sequenced, but the lead voice will be performed by hand by Tellier-Craig on the synth who has recently featured on musiccritic.com for consistenly and very engaging works. Normally, when Tellier-Craig performs he does so as a duo under the name Le RÃ©vÃ©lateur, with Sabrina RattÃ© who creates corresponding moving images that play homage to late 1970s early 1980s computer video artists like Lillian Schwartz, Laurence Gartel, Toshio Matsumoto, Larry Cuba, Erkki Kurenniemi, etc. but the focus for Electric Fields will be purely on the sound. 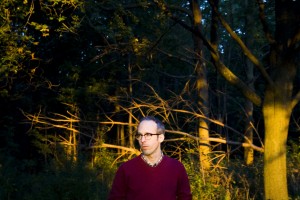 Known mostly from his time as a guitarist in the instrumental, minimalist post-rock bands God Speed! You Black Emperor and Fly Pan Am, Tellier-Craig has always been interested in synthesizers and electronic music. After overcoming the learning curve required to play the synth, he was hooked. âIt just so much more sense to me than playing guitar. Guitar has never been something I really liked that much.â

Tellier-Craig has an interest in the historical legacy of older technologies. âWhen I first heard sequencers I thought they were cheesy and found them kind of kitsch.â But as he dug further into the technology and itâs history he began to realize that at some point in time synthesizers were new, and their kitsch associations have come through overuse in cinema, television and mass media.

He became interested in recontexualizing synth sounds by putting them in conjunction with other sounds from different eras. Tellier-Craig combines dense atonal and discordant sounds with new age music, with all itâs excessive historical baggage. He contrasts references to the Berlin school of electronic/pop music with density and noise inspired by Iannis Xenakisâ pioneering use of mathematical models in music. This mix-up and confusion is something that interests Tellier-Craig; he sees it as a challenge to move beyond comfort zones and familiar styles. While he takes inspiration from older music and technologies, his aspiration is for his music to move beyond updating and seek out challenging and uncomfortable surprises. The reverb inside St Brigidâs will present a different kind of challenge, and will require some adaptation to work with the ten speaker surround sound system and the acoustics of the space.

All music on the night will be taken from his latest album Fictions, with a limited run of 500 there are only 100 left to purchase online from the label Gneiss Things and Forced Exposure. Listen to a sample from the album, a track Age Maze, which will feature in the Electric Fields performance: http://soundcloud.com/le-revelateur/age-maze

Tickets are $10 and are available to purchase from Artengine.

This entry was posted on Thursday, November 24th, 2011 at 1:34 pm and is filed under Electric Fields, Jaenine Parkinson. You can follow any responses to this entry through the RSS 2.0 feed. You can leave a response, or trackback from your own site.