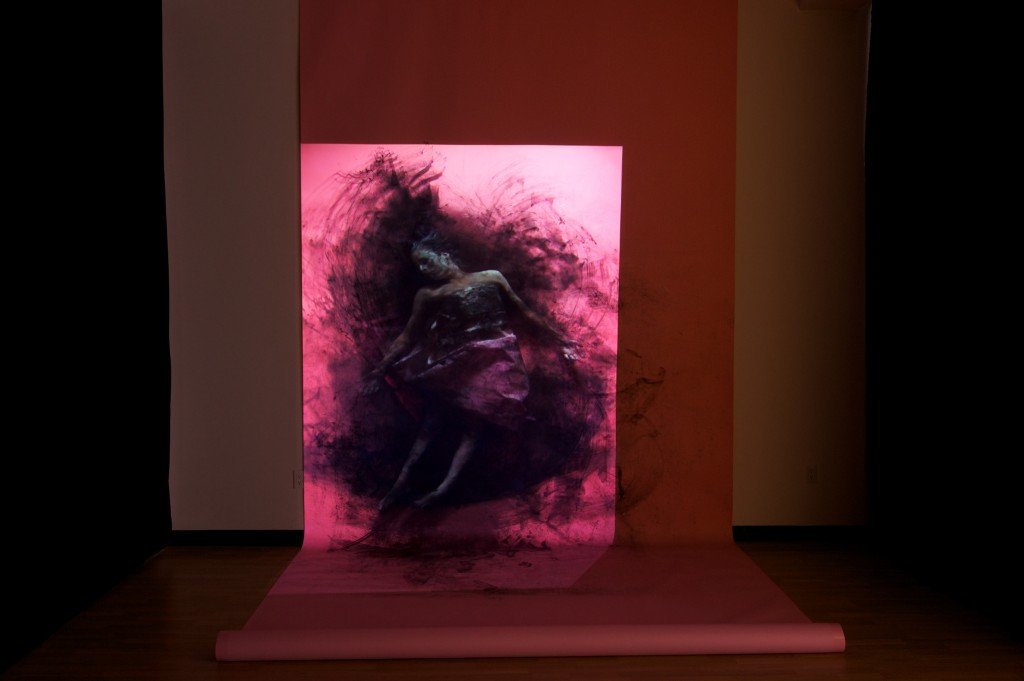 Xia, a video installation by Montreal based artist PhilomÃ¨ne LongprÃ©, caught my eye recently at the Gallery 101 show Body Tracks | Traces de corps (10 June – 9 July) in Ottawa*. It was given prominence, taking over the entire back half of the exhibition space with the rest of the, mainly video, works all reduced to monitor size. It certainly needed and warranted the space.

XiaÂ looms as a cool projection of a woman cast onto a backdrop of pink canvas. The canvas rolls off the wall and along the floor into the space and the woman appears pinned to it, like a butterfly in a shadow box, trapped and on display as an allegory of beauty and mortality. Twisting, tossing, turning, resting and stretching, often with glitching, frantic movements, she gives off a nervous desperation. It is as if she is caught in a nightmare, running but getting nowhere. Her frantically flailing limbs spread heavy charcoal marks across the rich rosy-pink backdrop. The drama of the piece is heightened by the lightingâan extreme chiaroscuro, which could easily be described as Caravaggesque tenebrism. The strong shadows and highlights sculpt the rumpled fabric loosely wrapped around her figure, exaggerating the contours of her face and body to haunting effect.

With Xia LongprÃ© has formed a virtual, pocket of time and space that is annexed onto our own. The space is shallow with no foreground or background; the depth is more like a relief. The cameraâs point of view does not move, forming a seal between this pocket of virtual space and our own. Dark footprints lead along the pink canvas lying on the floor, like traces of someone having left this reality and leapt into the alternate sanguine atmosphere. There is a doubling of real charcoal handprints beneath their projected counterparts, in a way that produces a hint of depth. Gravity behaves differently in this other realm. The woman is suspended in space, floating as if she is in a liquid environment. Sounds of cicadas, beating insect wings, pouring water and metallic scratching reinforce the feeling that we have opened up a gate to a parallel existence. 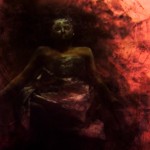 The work apparently reacts to visitorsâ movements through motion sensors but I missed its responsiveness entirely. This sometimes happens with subtly interactive work that has no obvious interface. Regardless, I donât think this detracted from my experience. I did, however, notice two subtly different phases in the piece. At some point the woman appears to be wearing a grotesque mask and the color projected onto the background turns it more coral than rose. Whether I was triggering video sequences and not noticing it, or not, the work seemed to address me more like a painting; something that would carry on being despite whether I was there or not.

Like a moving paintingÂ LongprÃ©âs work is similar to that of video artist Bill Violaâs (interestingly Viola just received an award for painting). Beyond opening up another virtual, illusionistic space on the surface of the pink canvas Longpre, like Viola, references the painting tradition, with its lighting, static frame, and figure placed at the centre of the composition, at a scale proportional to our own. Both artists also treat time as material, slowing down and speeding up movements in a way that renders them surreal and supernatural. While it is often hard to know whether the loop of a video installation is merely conventional or intentionally meaningful, repetition seems inherent to the reverberating space LongprÃ© has constructed. The woman in Xia is trapped in a prison of a collapsed present, sliding down a spiral of infinite regress. This is artificial, digital time. Time that slips out from under standard linear perceptions and progressions. Like Viola, LongprÃ©âs work is highly crafted, lyrical and poetic and makes the most of advances in ever affordable and accessible digital technologies.

The publicity draw-card of the show is Ana Mendieta and the mystique surrounding her (and her untimely death). The curator (and author of a graphic novel based on Mendietaâs life, also featured in the show) has selected Mendietaâs Untitled aka Body Tracks (Blood sign #2), 1974 as the headlining work of the show. In this performance Mendieta drags her blood soaked arms down a wall with a simple, sweeping, singular gesture. The mark she creates is elemental, iconic and can be read in any number of ways: tree, uterus, pictograph… Unfortunately, the video was not well presented in the show, positioned too close to the entrance on a rather rough translucent screen.

The ties between Mendietaâs work and LongprÃ©âs are easy to thread: the body as paintbrush, the critical feminist undercurrent, the power of a single expressive gesture. The female body as a site of expression and resistance, crystalised in video, is a theme that runs across the whole show.Â  Video works by Jude Norris and Anna Peak similarly hinge around a singular expressive gesture enacted by a strong female individual. They lend a context for LongprÃ©âs work to be read within. In exchange Xia adds nuance into the exhibition narrative; the feminine character depicted here is in turn determined and trapped, beautiful and frightening.

Body Tracks is awash with screens, a symptom of an art world swamped by moving images. This trend is so pervasive critic Dominique PaÃ¯ni even went so far as to pen an article for the journal October entitled âShould we put an end to projection?â This sentiment is a far cry from a pre-90s era where video struggled to gain recognition in the art world. Now everything else lives in its shadow. With a quick lick of paint the white cube has become a black box. Phrases like new media or multi media installation still resound as metonyms for video installation. Nine times out of ten when you read or hear the phrase ânew media workâ you can bet it means âthereâs a projection.â

In his article PaÃ¯ni charts a parallel art history of projected light; one of images dematarialized and made more spectacular transforming the viewer into a contemporary flaneur, who browses and flits between video installations like a window shopper. Art historian Kate Mondloch asks âby creating media installations that support or even require visitors to determine the length of their experience with the work, might artists unintentionally provide for a spectatorship characterized by short attention spans?â

It would be easy for us to see the art worldâs insatiable desire for ever larger audio visual installations as a way to draw in crowds with quickly digestible spectacles and just as easy to see the desire for video as simply manifesting a desire for the new. Though to indiscriminately rebuke artistsâ continuing interest in video as merely trend following or crowd pleasing fails to see that, as Mondloch puts, it we are living in a âsociety of the screen.â We are subsumed by the moving image in its many forms: projections, monitors, computer screens, smartphones; cinemas, electronic billboards, youtube… to the point where it is hard to get critical distance. The screen has replaced the painted or printed image as the foundation for contemporary visual communication. As it continues to become more pervasive and more universal, blending illusionistic and information spaces, Mondloch suggests we will need to continue to âthink through our thinking through media screens.â

*XiaÂ will be shown again, within a modified exhibition, at FOFA Gallery, Concordia University, Montreal from 6 September to 10 October 2011.

This entry was posted on Friday, August 5th, 2011 at 2:21 pm and is filed under Critical Resident, Jaenine Parkinson. You can follow any responses to this entry through the RSS 2.0 feed. You can leave a response, or trackback from your own site.