âEven the most perfect reproduction of a work of art is lacking in one element: its presence in time and space, its unique existence at the place where it happens to be.â – Walter Benjamin 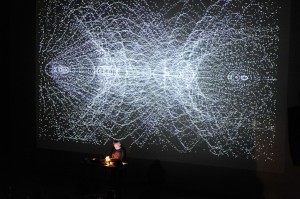 The majority of Elektra 12 performances were characterised by pulsing, glitching, looping, staccato sounds and swirling, strobing, twitching, projected graphic visualizations generated by solo performers on laptops in front of a big screen. Iâll admit up front that this is not my scene and after a while I developed an acute case of ADD (the arduous length of some of them was definitely a contributing factor). My wandering mind kept getting stuck on one question: What value do the artists and audience place on this experience being a live performance?

Well, to begin with, the setup they had at Usine-C was definitely much more impressive than anything you might have at home. Also, the artists were quite possibly adapting, remixing and producing their performances on the fly in response to the (rather stagnant) audience. But you would have needed to have heard previous performances or recordings to know. Oftentimes, the guy (at Elektra they were always guys) behind the laptop would start grooving along to the beat. But we canât really see his laptop screen or what he is doing. The projected visualizations became the only visual evidence of what we were hearing. With this style of performance there seemed to be no components that, to my mind, could not be recorded and played back: devoid of any claim to being live. 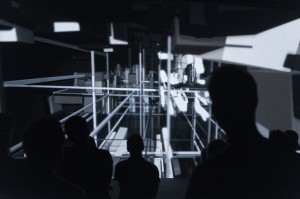 Although, the same protest could be made about any standard pop or rock concert where all the sound and imagery is mediated and processed through technological systems. Since Milli Vanili everyone lip-synchs. The only difference is that with your lip-synching singer there is still a nod to the generative action we are familiar with from traditional musical and physical performance. But the show could very well go on without them. With computer generated AV performances we must release our hold on the aura of the original gesture. The pairing of sound and movement, simulated or not, is absent. There is a correlation between image and sound, but never image, sound and gesture. The only element of live performance that remains is the performers presence in the same space as the audience, controlling the event. It is boiled down liveness.

But why do they do it? Why do they hang onto this last bastion of liveness? Why do they clamber up on stage in front of everyone, especially when it is very difficult for the audience to deduce exactly what they are doing behind their laptop lid? Perhaps it is because live events have high cultural currency. There are social constructs and dichotomies that remain, which position the live above the mediated; the manual above the automated. Being live gives the work a unique status as rare and irreproducible: it confines the work spatially making it only accessible to those present. Being live also renders the work as an open text, giving the artist freedom to respond to the specifics of place and audience. It also releases them from the perfection required of a single recording, and opens up to improvisation and risk taking in the moment. All these cultural constructs are desirable enough to warrant framing presentations of these audiovisual works as live. 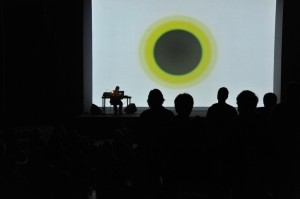 It is important to acknowledge that what counts culturally as âliveâ has changed over time in relation to technological development. We can have a âlive broadcastâ, where the audience is only present in the same time, not the same place, as the performer. We even accept the potentially oxymoronic notion of âlive recordingsâ: one-off performances that audiences listen to at another time and another place. With all this stretching of the definition of live, what we are left with, critic Philip Auslander suggests, is affective liveness. What we are willing to accept as liveâbased on cues and demands imbedded in the delivery of the work and itâs social codingâthat is what live is.

Maybe what I was sensing was that this type of performance had stretched the definition of live just a little too far for me. AndÂ  Iâm not the only one who has felt this. The organization TOPLAP, an affiliation of artists using live coding to improvise with music and visuals, are all about exposing the process as performance. The first two demands of their manifesto are: âGive us access to the performer’s mind, to the whole human instrument. Obscurantism is dangerous: show us your screens.â Theirs is one possible way to address the question of how to render a claim to liveness in a performance.Â  Even a duo or group of performers can add tension and more explicit communication of live improvisation. 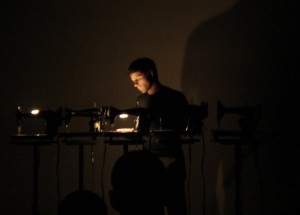 Other performers at Elektra 12 provided examples of different ways to convey liveness in performance. Louis-Philippe Demers, Armin Purkrabek and Phillip Schulzeâs can-can dancing robots were mechanized stand-ins for human performers. Martin Messier’s work Sewing Machine Orchestra was performed by a bank of computer controlled 1940s Singer sewing machines. (Interestingly, Messier admits his presence on stage is redundant, although he still does it.) Others incorporated elements of traditional performance: staging, movement and props. For instance, 1024 Architecture, whoâs highly entertaining performance Euphorie, used layers of translucent screens to catch their projections and performed with customized controllers (think light-saber guitar solos). Then there is always the possibility of using actors. Daredroid was performed by a woman (not devised by a woman) wearing a costume that turned her into a drink dispensing machine with legs and breasts. This is no game substituted living avatars into a first-person shooter style gaming system. In the end I am just more willing to read these works as live than the laptop solos that dominated Elektra 12 performance series. Perhaps we will get a more balanced diversity of performances and performers with Elektraâs biennial expansion, planned for 2012.

For more from Philip Auslander about the evolution of the concept of liveness see: www.vimeo.com/20473967

– With special thanks to Tasman Richardson for his insight into live AV performance.

This entry was posted on Saturday, June 11th, 2011 at 7:02 pm and is filed under Critical Resident, Jaenine Parkinson. You can follow any responses to this entry through the RSS 2.0 feed. You can leave a response, or trackback from your own site.

One Response to “Elektra 12: The dubious liveness of laptop performance”