some notes from transmediale 11

Earlier this month I attended parts of the transmediale 11 festival in Berlin, and I thought I would share some of the ideas and discussions I encountered during my festival meanderings, on subjects like freedom, power, knowledge, privacy and openness…all tied to the main theme of the festival itself: Response:ability. Here are some notes on some of what I saw and heard…

Mozilla’s Mark Surman, in his Marshall McLuhan lecture, focused on the idea of freedom as a framework for talking about the web. Mark has adapted Richard Stallman’s four freedoms (to run, study, redistribute and use software) to his own version of use, study, remix, share. He argued that this type of freedom, the freedom of open-endedness, of something never finished, is built into the fabric of the web itself, it is an inherent quality ‘baked in’. Or in other words, âthe web sez ‘build me’â. Like Lego! This open-endedness and the freedom to develop without asking permission is what fuels rapid innovation, benefiting grass roots organizations, global capital and anyone else who builds off of the tools and standards available for adaptation and reuse. We cannot take for granted these inherent freedoms, and Mark believes that we are now at an important point in time where decisions must be made about how all of this will continue to work and how freedom will continue to be built into the web. Using the example of the history of innovation and decision making in cinema, he pointed to one way in which Mozilla is trying to ensure continued web freedom: their Popcorn project which uses the native video handling of HTML5 to develop âhypervideoâ tools to integrate video with content from just about any other web source. Mozilla also sponsored the first Open Web Award at transmediale this year, which went to the Evan Roth’s Graffiti Markup Language (GML) project.
Some links:
http://www.webmonkey.com/2010/08/mozillas-popcorn-project-adds-extra-flavor-to-web-video/
http://webmademovies.etherworks.ca/popcorndemo/
http://blog.mozilla.com/blog/2011/02/07/first-transmediale-open-web-award/

I had the opportunity to interview Scott Kildall and Nathaniel Stern, whose ‘Wikipedia Art’ project was nominated for the transmediale award. I have transcribing and editing to do and will post the complete interview online when it is ready. Their project interested me because it takes as its source ‘material’ Wikipedia itself, it’s culture and the power structures that drive it. Through an intervention which took the form of a Wikipedia article and the ensuing discussion and documentation surrounding it Nathaniel and Scott have brought into question the mechanisms of knowledge production, the pursuit of truth and objectivity and the perceived authority of Wikipedia. Their project seemed to push a lot of buttons, provoking some heated debate of whether to keep the page in Wikipedia or not and whether it was in fact an act of vandalism. While Scott and Nathaniel are both proclaimed fans of Wikipedia, they hope that their project revealed the need for greater media literacy in the use of this resource.
http://wikipediaart.org/
Recent NY Times article about Wikipedia gender gap

Tackling the issues surrounding privacy online, Mushon Zer-Aviv presented a talk called âGetting Intimate with Invisible Audiencesâ in which he spoke about the privacy debate and the binary opposition it promotes between public and private poles of what should actually be a spectrum of more complex concepts, like confidentiality and intimacy. This binary opposition both dumbs down social interaction online and taints privacy with suspicion â if you have nothing to hide, why do you need to keep information private? He talked about Danah Boyd’s idea of the invisible audience as a characteristic of mediated publics and the way in which the resulting state of visibility can both assure the functioning of power in public spaces, and yet also become a means of publishing. In his conclusion, Mushon highlighted the importance of not only defining the protocols for interaction in these new mediated publics, but of defining the culture that will allow a broader spectrum of relationships to exist in them.
I highly recommend reading the details of his talk, which are available here: http://mushon.com/blog/2010/09/21/getting-intimate-with-invisible-audiences/ 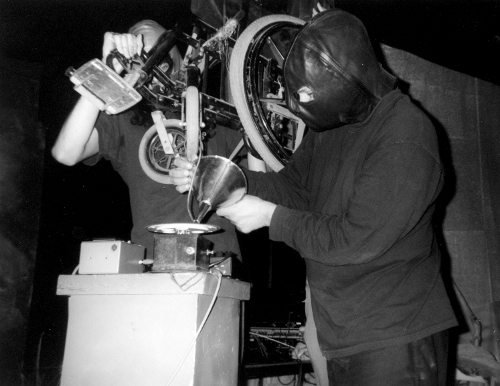 At the sister festival, club transmediale (CTM) I went to see a performance called âLoud Luggage / Booming Baggageâ by GX Jupitter-Larsen (The Haters). This performance is documented on his website as follows: âOn Feb 2, GX Jupitter-Larsen squeezed an amplified toy shovel against an amplified suitcase. (#358).â I was with a friend, at the back of a small crowded room. My friend, who is taller than me, was trying to take a photo and I asked him if he could see anything. A woman nearby replied âYou don’t need to see, it is a sound performance.â I thought this comment was interesting given the CTM festival theme of #LIVE!? and the many different and illusive things that ‘live’ can mean in electronic music and sound performances. In the stage performances of the Haters, the emphasis is more on the action taking place rather than on the creation of sound for it’s own sake, so in not being able to see anything I felt I was missing something integral. Hopefully I will have a future opportunity to both see and hear a Haters performance.
http://jupitter-larsen.com/

This entry was posted on Monday, February 14th, 2011 at 3:56 pm and is filed under Corina McDonald. You can follow any responses to this entry through the RSS 2.0 feed. You can leave a response, or trackback from your own site.