When Paul Mumby mentioned he had made a 3D printer at the last meetup I had assumed he meant he had procured and built a Makerbot. THAT ASSUMPTION WAS WRONG. Paul brought in his homemade 3D printer to our meetup and got it happily extruding before night’s end. 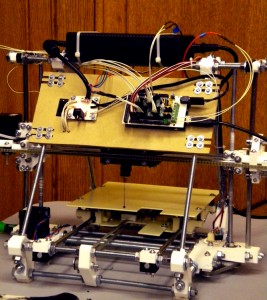 “I spent about 3 months building in total. Of that, about 4 weeks collectively was passively waiting on parts, and another 2 weeks was spent fulltime (probably 6-8 hours a day working on it).

I bartered and traded for alot of the electronic components, and the RP (Rapid Prototyped, printable plastic) parts… The hardware in the design calls for all metric parts, which are hard to find in Canada (and more expensive) so I decided to go entirely imperial, which required much conversion. But it saved me some money and made parts easier to find. Overall I’ve spent probably just under $1000 on the project.

The actual extruder “hot end” (the heating element, barrel, and nozel assembly, with thermal sensor and so on) I purchased pre-assembled from Maker-Gear.

The electronics are a blend of a design from a community member online built around the Arduino microcontroller, and my own design. I built all the electronics myself.

We (My wife and I) plan on using it to support the community (help people with parts or items they need printing) and to use it for several personal projects as well… Also I’m hoping to sell off replicated mendel part sets (To build a duplicate machine) to recoup some of the money spent on the project.” 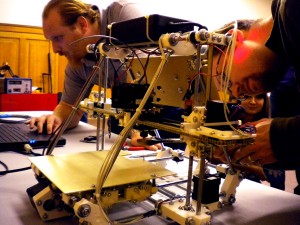 Ah those pesky imperial to metric conversions- I feel your pain Paul, but in the opposite way. “Imperial FTW!” says the American. Paul’s awesome lil’ number is going at the Ottawa Maker Faire in our Mini 3D Village on November 6th and 7th so come check it out!

This entry was posted on Monday, October 25th, 2010 at 3:08 pm and is filed under Emily Daniels. You can follow any responses to this entry through the RSS 2.0 feed. You can leave a response, or trackback from your own site.