Pitch a tent in Meaford this long weekend

This is the Meaford I know. Nestled quaintly on the Southern shore of Georgian Bay, Meaford for me means farming, it means my grandparents homestead, rolling hillsides, markets and lazy summer afternoons. It hadn’t (until recently) meant anything related to new media or electronic arts. That is, however, until I discoveredÂ Electric Eclectics ;Â Â festival of experimental music and sound art that has been taking place for the past five years overÂ  the August Long Weekend on a farm (The Funny Farm, owned by festivalÂ director Gordon Monahan)Â that overlooksÂ Beaver Valley. JuxtaposingÂ thisÂ bucolic rural scenery with a line up of avant-garde artists and crossover musicians that includesÂ HEALTH, AIDS Wolf, DD/MM/YYYY, Let’s Paint TV; a midnight presentation of Tommy Wiseau’s film, “The Room” as well as installations by Andrew Harwood,Â  Cinecycle, Marla HladyÂ and Christof Migone, EEÂ seems like it will be an amazing mix of sounds and sights, a space to truly emerse yourself in the art and the outdoors.Â

There is something I really love about events like this that take place in smaller, less central locations. There is also something more to be said for festival organizers who take it upon themselves to start something new, to decide that instead of always venturing afar to experience the avant-garde that they will bring (or at least attempt to bring) these artists to them, in this case to their very own back yard, as Monahan decided to do for the first EE in 2006.Â  This d-i-y approach may cost the event some of the slick production quality of other electronic arts extravaganzas, but with the philosophy of not only supporting artists who are adept at bending, crossing or completely redefining musical and artistic categories, but also exposing new communities to these types of artists, it is festivals like EE that seem like fresh pockets of creativity.

Both Monahan and EE co-director Chris Worden was in town last week for Bluesfest, where they had arranged, for the third year in a row, to co-present Electric Ecelctics satellite concerts, as previews for the festival proper. Certainly again, if you want to find an example of a festival attempting to expose new communities to electronic arts, I would label the EE performances at Bluesfest this year as nothing short of shear courageousness on the part of both festivalsâ organizers. (They are in fact brothersâ¦) 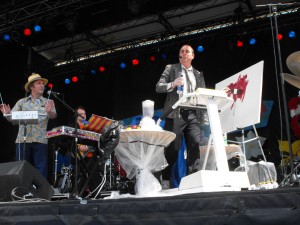 On the first Saturday of BF, I spent what I think was the hottest afternoon of the year watching Letâs Paint TV (who will perform in Meaford on Saturday night) play between musical sets on the Subway Stage. An internationally renowned YouTube phenomena, HIS NAME is probably the farthest thing away from the balls-to-the-wall, face melting, fifteen minute guitar solos that can tend to typify headliners at BF since it moved to Lebreton Flats. Letâs Paint TVâs act is fairly straight forward â accompanied by the sounds of a theramine, synth, drums and various percussive instruments â he runs on a treadmill, while making fresh blended drinks and painting. Yep, running, blending and painting! For the performance I saw, he attempted to capture the beauty of the Ottawa River stretching out beyond the festival site, while mixing a cocktail of bananas, apples and mangos. Spouting words of encouragement and inspiration on how to the audience could achieve their physical and creative potential – a Jimmy Stewart for the arts â Letâs Paint TV sweat it out three times that afternoon, to crowds that grew increasingly perplexed, if not down-right obnoxious. Of course, there were some die-hard fans who actually came to see him perform, but for the most part, he was met with gawks, guffaws and even jeering, especially from the lawn-chair crowd, who had arrived early to see WHO.Â  I later found out that this was the first time EE had presented any of its performers on the outdoor stages. Admittedly, Letâs Paint TV is gimmicky; it is kitchy, random and at times, a bit of a gong show, which didnât entirely translate onto such a large stage. It was, however, amazing to see a balding, suited man jog, juice and channel Jackson Pollock in 32Âº. I can see why Letâs Paint TV has garnered such a cult following, and if Ottawa wasnât ready for it, maybe Meaford will be next weekend. 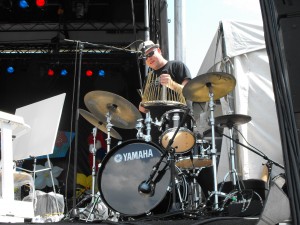 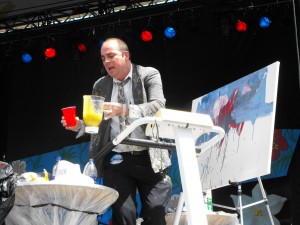 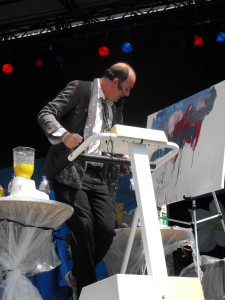 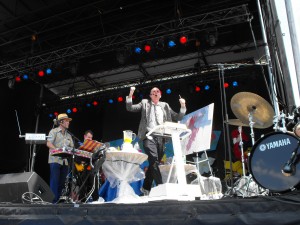 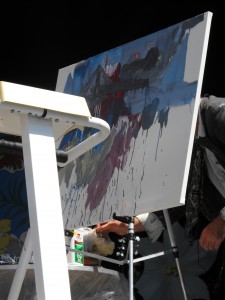 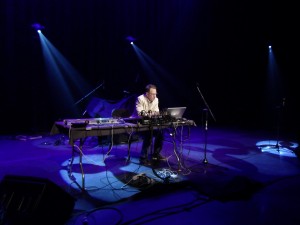 The second performance presented by EE at Bluesfest was a set by Nicolas Collins in the Barney Danson Theatre, the space where all the past EE presentations have taken place in. Cloistered away from the rest of the festival, the theatre is the ideal space for EE to present artists â most obviously for the fact that it can support the various types of electronics and audio-visual presentations that would not fair well on any of the outdoor stages. For better or for worse, it also shelters these performances from unassuming, potential audiences; anyone who wants to see these shows will seek them out, but few people happen upon them accidentally, which is a shame.

Collins, who will also be performing at EE on Saturday night, is the antithesis of Letâs Paint TV. A professor in the Department of Sound at the Art Institute of Chicago, the editor of Leonardo Music Journal and author of several books including Handmade Electronic Music: The Art of Hardward Hacking (now in its second edition), he is an icon of the genre and an academic through and through. Taking the stage in loafers, and a beige blazer, he spent his first song seated nonchalantly behind his laptop, studying the screen as though reading or editing an article, thoughtfully and purposefully tapping a key or two at select intervals. His music is quite classic in the electronic sense, and includes song written entirely for skipping CDs, custom circuit compositions, electromagnetically manipulated instruments, as well as spoken word and orchestrations for musicians who imitate these digital noises. Coming from a generation of composers that includes Alvin Lucier, Gordon Mumma and David Tudor, Collins is entirely old-school, and watching him in the air conditioned comfort of the Barney Danson Theatre felt very much like seeing a lecture in a university classroom, one, of course, accompanied by a wall of sound and feedback! 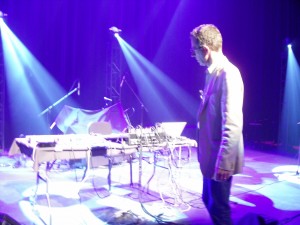 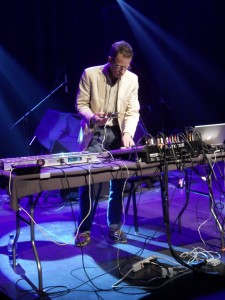 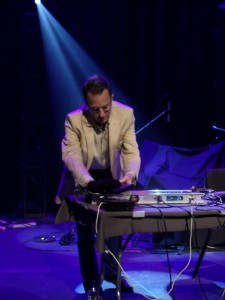 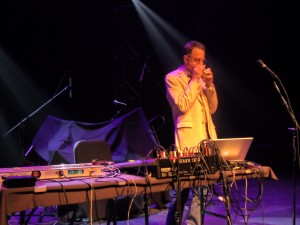 The strength in theseÂ two performances was that they represented both sides of the spectrum of performances that will be showcased this weekend at Eletric Ecelctics. It was unfortunate that neither performance was very well attended, or altogether all that well received by the Bluesfest audience. It is alsoÂ unfortunate that neither was ultimately as dynamic as what the rest of the EE line-up seems to be; however, I still hold out hope for the events this weekend, up on that rolling hillside in the Beaver Valley.

This entry was posted on Tuesday, July 27th, 2010 at 9:31 pm and is filed under Critical Resident, Rhiannon Vogl. You can follow any responses to this entry through the RSS 2.0 feed. You can leave a response, or trackback from your own site.

One Response to “Pitch a tent in Meaford this long weekend”