Presented by Artengine in collaboration with the Available Light Screening 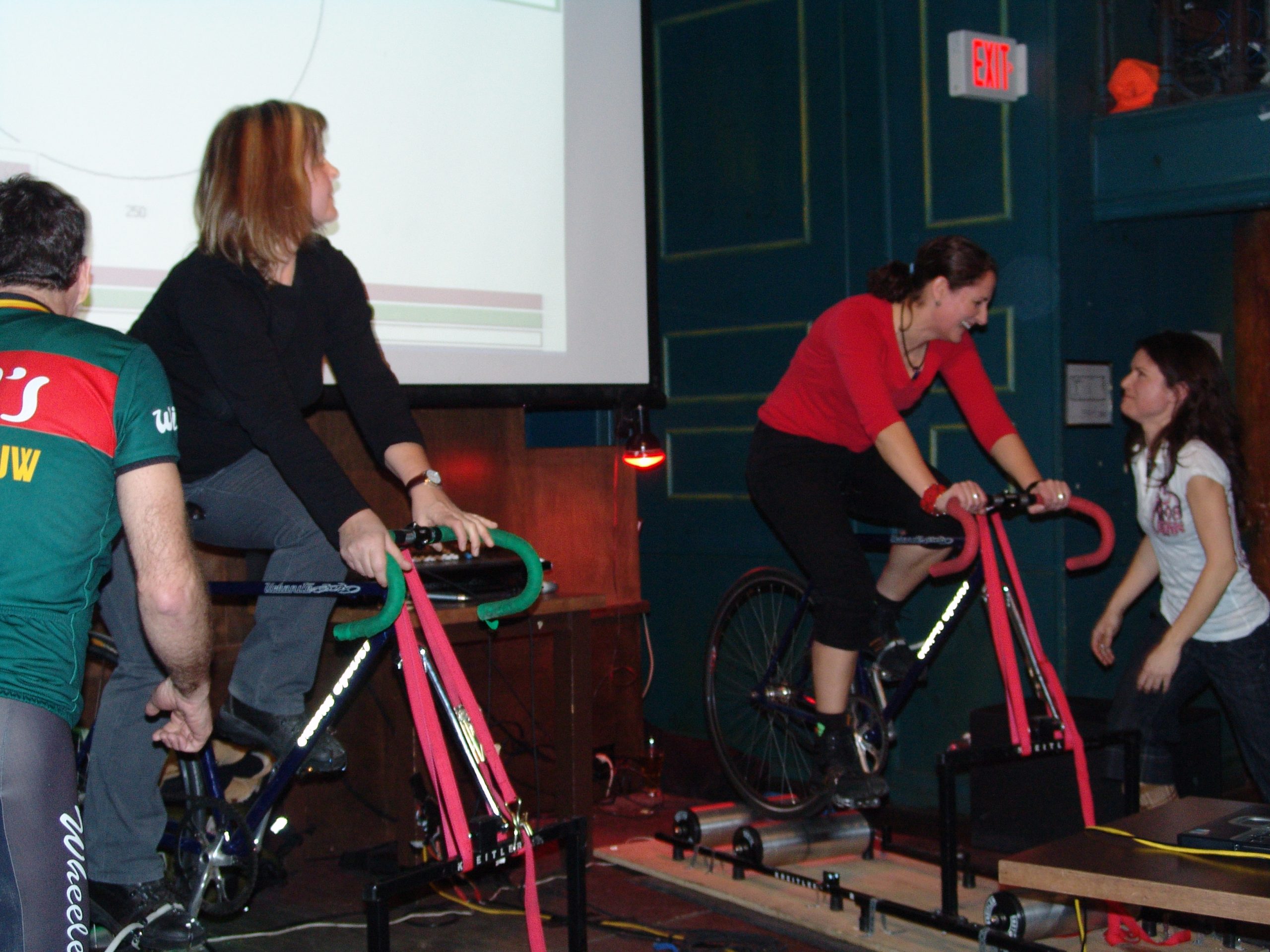 This unique exhibition brings 5 newly created works, and a special hockey themed screening, to a whole new environment for contemporary art – the sports bar. These works, commissioned by Artengine, will be presented for 3 weeks at locations in the Elgin Street area. The opening night party, at Hooley’s, included an incredible stationary bike race tournament open to everyone. “From a rock throwing, stick swinging, rhythm oriented animal we evolved to become the only animal to consciously organize play. Today, goal oriented play provides the foundation for the wide and often polarized worlds of the arts and sport. The benefits of these playful activities are measured not only by their contribution to culture but also by the value they add to the economic arena. With a growing percentage of the economy being based on what were once purely playful activities, many wonder how they might transform their work into play, while others wonder how their play became so much work.” Read the complete curatorial text and visit the Superfan website.

The scope of sport

Currently, the combined annual attendance of 20 of the worlds largest amateur or college sports leagues reaches upwards of 90 million people. When you add in professional leagues, from hockey to cricket, that figure rises to near 500 million. This number does not include international competitions such as the Olympics, the FIFA World Cup, and other World Championships. Neither does it take into account the countless numbers attentively tuning in to broadcasts through radio, television and increasingly the internet; many of whom are at increased risk of heart attack as a result of the passion they have for these performances. These examples only begin to describe the pervasive place of sport in our global village.

Metaphors of sport have become exceptionally popular, invoked by psychologists, news analysts and organizational theorists alike, as a seemingly universal metaphor with ubiquitous meaning. However, the influence of the sporting world has moved far beyond the metaphors we live by. In his book, The Economy of Prestige, James English dedicates a whole chapter to how the proliferation of prizes within the art world may be seen as a form of international sport, where cultural production has replicated the competitive structures of sport within the subjective world of art. The most popular response to this analysis is to cynically decry this development, lament the rampant commercialization of art, and fear for the future, while often missing the deeper connection between these practices: when performed at their peak they produce transcendent moments for the artist-athlete and sometimes their audience.

Artists are often credited for contributing to significant shifts in the understanding of ourselves. Given the visual arts’ ability to alter our perception of the concrete world, it occupies an increasingly special place within our communities. This includes classic works of modern art in sculpture, painting and drawing, which have altered our perception of space and objects, but also increasingly complex contemporary pieces: Christoph Bechel’s enormous and meticulous hyper real installations leave us questioning the constructed nature of the world around us; Matthew Ritchie, who challenges classical physics’ understanding of energy and matter, crafts physical expressions of the mind-bending complexity of the holographic principle of the universe. The artist is not only finding new ways to express our conscious experience of the world, but to significantly alter that consciousness and lead the way as brokers in the meaning and substance of life.

Given the interest and contributions made by many contemporary artists to our understanding of ourselves, the aversion to the sporting world is notable. While dance retains an obvious connection to athletic ability and physical expressions of the body, and a significant cannon of work exists in cinema and literature on the subject of sports, the lack of interest in this pervasive form of play from the playful world of contemporary art is disappointing.

The critical mass of sport interest in the world has begun to creep into the world of contemporary art. The recent acquisition by the National Gallery of Canada of the installation version of Douglas Gordon and Philippe Parreno’s Zidane, A 21st Century Portrait reflects this broadening of perspective and makes accessible a significant artistic reflection on the character of an athlete, his or her relationship to the team and the nature of organized play.

The purpose of these installations is to extend these cultural conversations into a more public space. By putting these works of art into a domain where sports fans gather, we are encouraging you to reflect on the relationships between these works and the events you might be watching. Whether you become a fan of contemporary art or not is up to you, but we hope these unique considerations on athletic performance, a fan’s obsession or the bitter sweet feeling of being second best will enrich your sporting experience, superfan or otherwise.

Special thanks to our partners: Available Light Screening Collective, Gallery 101 and McAuslan Breweries

Jillian Mcdonald is a Canadian artist, living in New York where she teaches art at Pace University. Solo shows include Moti Hasson Gallery in New York and YYZ in Toronto. She received numerous grants and residencies and shows her work internationally. Mcdonald is a devoted fan of actor Billy Bob Thornton and zombie films.

Andra McCartney is a soundwalk artist, professor and parent currently residing in Montréal, where she teaches sound in media for the Communication Studies department at Concordia University. She has written extensively about soundscape composer Hildegard Westerkamp, and has undertaken several large projects on gender and sound technologies. She makes sound works for CD, radio, installation, and Internet.

Don Sinclair is a new media artist, professor, parent, and cyclist residing in Toronto. Drawing from his background in music, mathematics, computer science, and interdisciplinary studies, Don works in a variety of contexts including gallery installations, new media performance, interactive dance, and the web. He is currently Chair of the Fine Arts Cultural Studies Program at York University.

Florian Hollerweger was born in 1980 in Linz, Austria. He works as a sound artist, programmer, sound engineer, and performer. He has performed his own pieces as well as collaborative works with Pd~graz and others in the United States, Canada, and countries across Europe. Florian is currently studying at the Sonic Arts Research Centre in Belfast, Northern Ireland.

Linda Norstrom is a local artist and avid soccer mom. Her work has been screened in Europe and Canada, most recently at the Ottawa Art Gallery. She is a member of the Available Light Screening Collective and has been an active member in the media arts community for over a decade.

Liz Garlicki has exhibited at Gallery 101, The New Gallery, and numerous venues in Winnipeg, including the 2006 supernovas at the Winnipeg Art Gallery. A graduate of the University of Manitoba’s B.F.A. Honours programme, currently Liz supports students and newcomers to the Winnipeg art community through her employment as the Gallery Assistant at aceartinc., in the Winnipeg Exchange area.