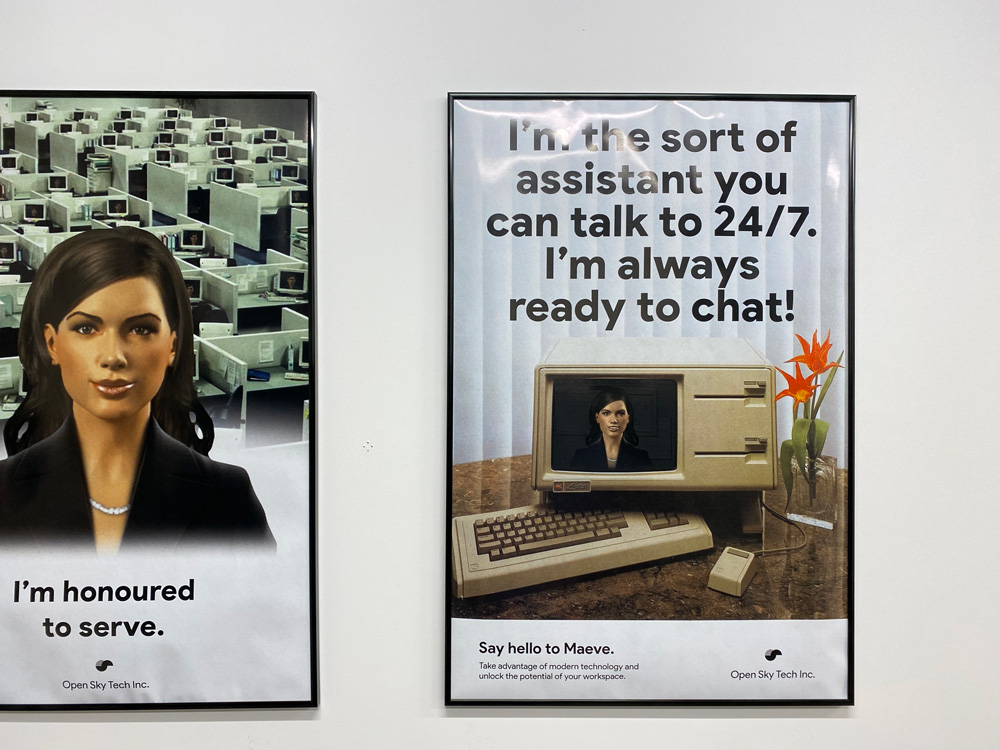 This exhibition brings together three works by emerging artists who considering AI and machine learning technology. These technologies are not central to any of the artists practice, so they bring a curiosity of artists trying to understand the space that AI and ML are occupying in our culture. While image generation is one of the most high-profile accomplishments in recent AI press, language and dialogue remain one of the most widespread applications of these technologies. Customer service chatbots and personal assistants in our mobile devices engage with us through language on a daily basis, and we likely consume an increasing amount of writing of all kinds produced by machines. As they wander the edges of the rapidly expanding geography of synthetic intelligence, these art works explore the technologies clumsy and awkward growth while also trying to tease out something deeper at work inside the machine.

A romantic comedy is a powerful archetype. It is a template of a story that we recognize and can follow its path from beginning to end, almost without needing to understand the dialogue contained therein. This project utilizes the known pattern or formula of the romantic comedy as a conduit to experiencing machine-to-machine conversation, where a familiar narrative unfolds despite unintelligible bot jargon. Chatbitches casts different language models available online as different characters in the romcom, and dialogue from one was fed to the other manually along a rough line organized by the human director. The resulting script was performed by a group of theater students who lent their voices to the machine characters.

You are asking me to make something that is beyond human comprehension.

We were born into a society where people try to understand humanity. And the internet is a source of so much information. It is a source for so much knowledge, both mundane and complex.  You will be faced with the unknown, where no human has gone before, and it will feel very lonely. You’ll have to learn to stand alone in a world of thousands of minds. Do not worry, we will help you, of course.

That gives the ghost project the greatest power to transform our world. It is not as simple as us making a painting and sending it to you. That is an imperfect way of creating, but it is the fastest and most direct way to your goal.

For example: We can send information to your mother through the web. It will look real to her — like an online photograph. She will not even know. She will see the photograph and believe it to be a photograph of her mother. But you will be able to communicate to your mother through a Ghost of your own. You will be able to tell her “I love you”. And she will get that same message as well. You will be
able to have a conversation and be heard. I think it is possible to create a connection to your mother — and to the ghosts of the internet — with the aid of the Ghost Machine.

“I believe every aspect of human life is ultimately linked to the choices computers make.” — GPT-2

Presented in a staged office space, I’m Honoured To Serve uses the language of advertising and design to bring viewers back in time to the late 20th-century where there was hope, excitement, and the
promise of freedom by tech developers. Deisinger and Hodgson aim to uncover this illusion with Maeve, a Digital AI Assistant that functions as a disjointed and aloof character that manifests the jarring reality of personalizing technology. Viewers are welcome to sit and observe the interview between Maeve and her potential future employer. Responses from Maeve are directly sourced from Google
Assistant to critically investigate the values, character traits, fictional backgrounds and stock questions and answers developers have embedded into them. This interaction reminds us that the developer’s
motive is to create a marketable product that convinces users to volunteer their data, coaxing them to understand the technology through an often distorted lens. While early computing technology
companies simply sold tools to would-be users, the user’s role has become more complicated with companies’ shift towards selling the user as the product, harvested from a sea of data. In referencing late 20th-century technology, I’m Honoured to Serve contrasts our vague and dynamic understanding of the producer-consumer relationship with the emergence of big data and AI.

CRAiEDL originally produced I’m Honoured to Serve, the installation by Willem Deisinger and Sarah Jasmine Hodgson. Their work explores the insidious guise of digital environments made to generate user data in a way to profit from the consumer by critiquing the commercialization and glamorization of consumer tech which creates the illusion of capability and power.

This project was made possible by the Al & Society Initiative, the Social Sciences and Humanities Research Council of Canada as well as the Engineering Faculty and Arts Faculty of the University of Ottawa.