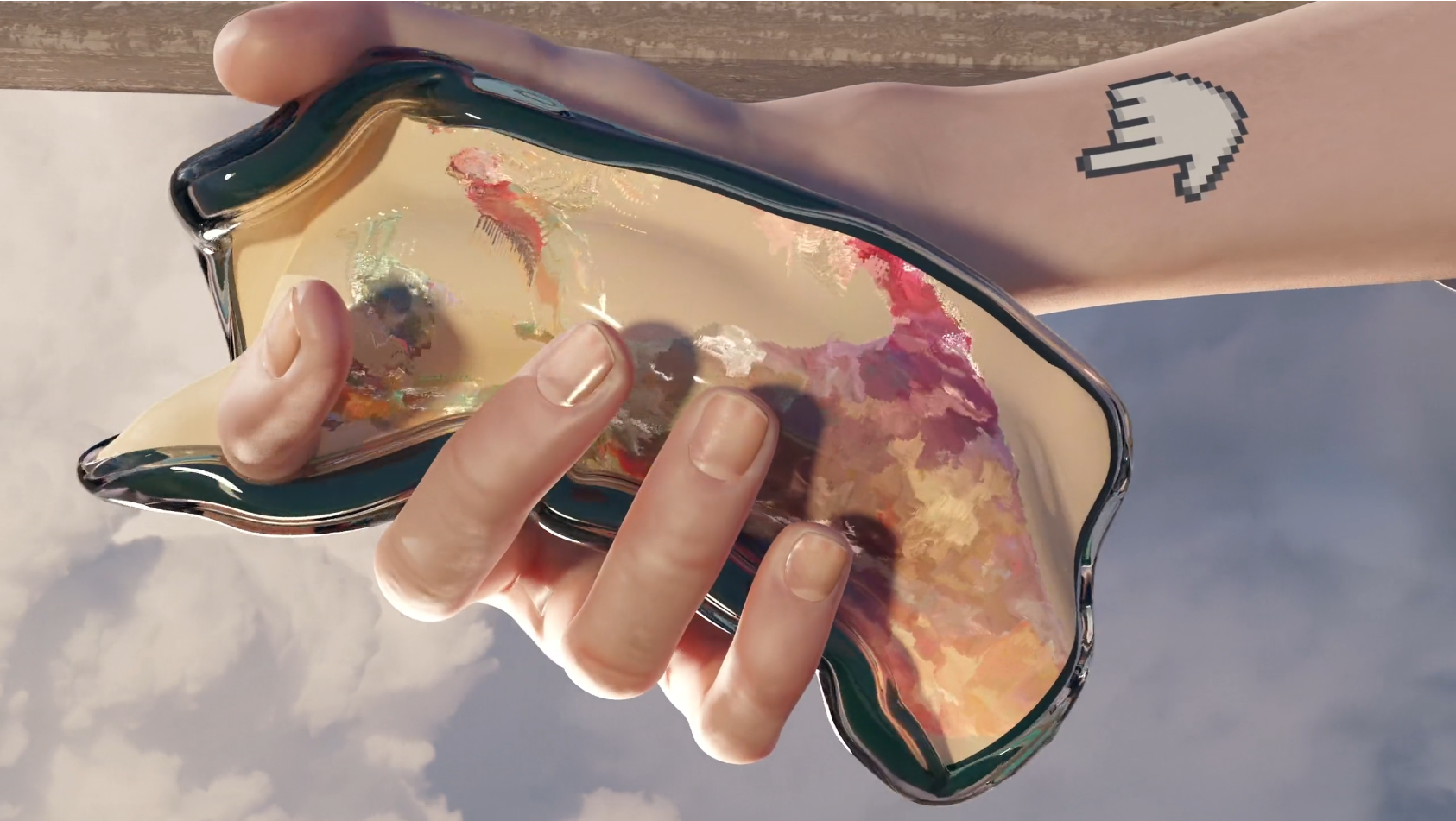 Artengine is delighted to collaborate with Critical Mass on their first Illuminights – an outdoor projection for Port Hope, Ontario. Fluid Light brings a cross section of projects that combine analogue and digital technologies with both contemplative and playful video projections into the streets of this changing Ontario small town. With work from Johann Baron Lanteigne, Laura Taler and Mercedes Ventura.

Our technology saturated world is always in motion. It seems like none of us can stay still. We pull at technology and it pulls at us. But we are always in motion, always changing. Some changes are faster than others, like changes in our profile pic or our clothes; some are slower, like learning to ride a bike or getting old, but we are, nonetheless, always transforming…always becoming something else. The works presented here on the streets of Port Hope offer a playful reflection on the fluid relationship between ourselves, change and the technology we live with.

Johann Baron Lanteigne is interested in how our gestures, and even our sense of self, stretch into the screen. We seem to be always tangling and untangling ourselves from its luminescent embrace, and these videos play around with the boundaries between where we end and the technology begins. He moves us back and forth over this fascinating border between us and our screens.

Mercedes Ventura is also thinking about this relationship to the screen, but she raises questions of identity and representation. Her work explores the opportunities that arise for us to recreate ourselves on the screens around us. Each time we make and remake ourselves for the screen, how do we keep track of what is true and what is an act? Does this matter?

Laura Taler shows us a different understanding of fluidity and the self. Like Ventura, Taler also presents her body on the screen but she seeks to calm the frenetic pace of change. Taler shares a meditative image, inviting you to be present in your body. While at first glance it feels like an analogue opposite to the colorful and energetic works of Ventura and Baron Lanteigne, Taler uses technology to play with time, fragmenting moments and her body. She seems to be asking, or perhaps offering, a way to bend time and slow us down into the here and now.

We hope these artworks help illuminate the winter nights of Port Hope, offering a playful and unique perspective on who we are when we live with so much technology.

Watch these videos below to hear more from the artists about their practice and their projects. (Videos produced by and courtesy of Critical Mass)

A winter series of Outdoor Art Illuminations will be displayed in 3 locations in downtown Port Hope for 3 nights, during the Candlelight Festival.  Critical Mass collaborated with Ottawa-based new media specialists and artist-run centre, Artengine, to curate this pilot projection art series, made possible with funding from RTO8.

The works presented – Fluid Light – aim to offer a reflection on the fluid relationship between ourselves, change, and the technology we live with. The hope is that these artworks will help illuminate the winter nights of Port Hope, offering a playful and unique perspective on who we are when we live with so much technology.

Critical Mass: A Centre for Contemporary Art is a Port Hope-based not-for-profit arts organization, led by a volunteer group of curators, artists and art supporters dedicated to bringing contemporary art experiences to the community we live in.

Carry Tiger to the Mountain 2017

Carry Tiger to the Mountain and the series of videos in Experiments with Carry Tiger, follow a woman performing a series of Tai Chi movements on a solitary beach overlooking the ocean. Shot on B&W Super 8 film, the work expresses a grounded, serene state while simultaneously addressing how the body is often fragmented into parts.  Although the practice of Tai Chi is slow and meditative, the form is actually a martial art that prepares one for confrontation.  This desire to fight, however, is really a desire to produce change. Change requires patience, repetition, time and, ultimately, a negotiation with loss. Playing on a series of continuous loops, Carry Tiger to the Mountain questions the separation between beginning and ending while proposing that slowness and repetition – often considered negatively in western notions of progress – can become, instead, harbingers of change and openings for transformation.

Manipulations is a series of animated works about gestures, their expressiveness and imperfections. The series also serves as a playground for technical explorations with the 3D medium. These explorations allow me to drive various simulations and procedural systems using motion capture data.

In the series, the use of visual textures and hands as a symbol help Baron Lanteigne refer to the sense of touch without stimulating it. This is inspired by our relationship with technology forming a thicker filter in how we communicate.

Throughout the series, he prototypes ideas and systems that can be combined intuitively in each iteration. Those fast results can later be integrated in other works. In this sense, the series acts as both a sketchbook and finite artworks which can be collected on the Ethereum blockchain.

The Sundew Mall: Expansion Pack is an extension of one of Ventura’s previous works titled The Sundew Mall (2021). The Sundew Mall is a labyrinth of web pages, a type of choose your own adventure, where the visitor can jump from page to page as a loose interpretation of a shopping mall, where each page acts as its own space within the mall. The hope is that one would get lost in the web of pages, which alludes to the nature of the internet itself, which captures us and keeps us there, a similar concept to how malls are designed, with the promise of constant entertainment and endless consumption.  The Sundew mall follows a loose narrative of a teenage girl in this mall. As an extension of this project, The Expansion Pack is set within the same mall/universe, but this time centers on the antagonist of the story, The Great Beholder, a character loosely based on role-playing game lore. This character’s identity fractures, thus reproducing itself into another opposing force. One who longs for something more than the confines of the mall. By using early web interface and video game graphics along with vaporwave aesthetics, Ventura is drawing further parallels between the internet and the shopping mall industry. At around the turn of the century both were considered beacons of hope for a prosperous and exciting future. While the American mall descended into decay and ruin (in part because of the internet), the internet continues to be an all-encompassing force within our daily lives, but not without its dark and diminishing spaces.

Mercedes Ventura (she/they) is an emerging interdisciplinary artist based in Odawa/Ottawa, Ontario. Mercedes’ work functions as autobiographical fiction investigating new spaces of the digital era, appropriating signifiers of self—gender, culture, religion, family, nation, and so on—as building blocks to envision works in various media: web, sculpture, and photographic self-portraiture to name a few. In the spring of 2017, Mercedes received a Bachelor of Fine Arts from the University of Ottawa. She has exhibited works in Odawa/Ottawa-Gatineau region and Tkaronto/Toronto in various galleries and artist-run centers. In the summer of 2020, Mercedes produced a web-based public artwork for the city of Ottawa and the Digital Arts Resource Centre.

Romanian-born Canadian artist Laura Taler began her career as a contemporary dance choreographer before turning her attention to filmmaking and visual art.  Throughout her career Taler has explored the links between movement, voice, memory, and history by using cinematic and choreographic devices to articulate how the body is able to carry the past without being oppressed by it. Her work has been praised for its unique combination of emotional resonance, wit, and striking visuals.  She has been a resident at the Banff Center for the Arts, Centro Cultural Recoleta (Buenos Aires), Carleton Immersive Media Studio (Ottawa) and a fellow at the Instititute for Cultural Inquiry (Berlin). Awards include a Gold Hugo from the Chicago International Film Festival, the Best Experimental Documentary award from Hot Docs!, Best of the Festival from New York’s Dance on Camera Festival, and the Dennis Tourbin Prize for New Performance.  Her work has been featured in theatres, galleries, festivals, special screenings, and broadcast internationally.